Eritrea to reopen embassy in Addis Ababa during Afwerki's visit

Eritrea will reopen its embassy in the Ethiopian capital Addis Ababa on Monday July 16, after over two decades of closure.

The ceremony will be part of President Isaias Afwerki’s three-day official visit to Ethiopia. Afwerki is expected in Addis Ababa on Saturday in a reciprocal visit to that of Ethiopian PM Abiy Ahmed last week.

“Eritrean embassy in Ethiopia will go operational on Monday,” Ethiopia’s Information Minister Ahmed Shide told a press conference on Friday. Ethiopians have been urged to turn up in large numbers to welcome the Eritrean leader.

“We urge residents of Addis Ababa and its environs in Oromiya Regional State to come out in large numbers to extend their brotherly welcome to HE President Isaias Afwerki and his delegation in the Ethiopian cultural way, with discipline and love,” he added.

Both governments confirmed Afwerki’s visit after Ethiopian media had earlier reported that he was due in town on Sunday. Afwerki is expected to address a gathering at the Millenium Hall with a musical concert planned in his honour.

President Afwerki’s visit will be his first since war broke out between the two countries in 1998. The visit will cement and add momentum to the joint march for peace and cooperation set in motion by both leaders.

Normalizing relations between Ethiopia and Eritrea is expected to transform the Horn of Africa region, ending decades of animosity during which both countries remained isolated and dominated by their security forces. 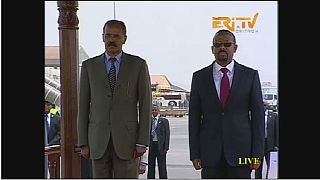