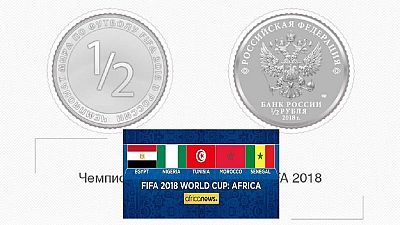 Russia’s central bank said on Friday it would issue a commemorative half-rouble coin if the national soccer team beats Croatia in their World Cup quarter-final this Saturday.

The recent success of the Russian team, widely scorned at home for their poor performances in the past, has taken the country and the soccer world by surprise.
Russia reallies behind its team.

Russian supporters and state officials now have begun rallying around the team in light of their unexpected victories.

When the president supports you that makes us comfortable and this is an extra boost for us in terms of motivation.

In a vivid example of such support, the Bank of Russia posted a picture on its social media pages of the silver-coloured coin featuring the fraction “1/2” and the inscription “FIFA 2018 Soccer World Cup in Russia.”

The central bank’s press office confirmed the bank was committed to mint such a coin if Russia beat Croatia in the match that kicks off on Saturday at 1800 GMT in Sochi.

Half-rouble coins do not exist in Russia, but there are 50-kopeck coins of the same face value, the equivalent of less than $0.01. It was unclear when the central bank could mint such a coin and in what quantities.

Putin calls and players who have become heroes

Accolades have included a bison being named after Russia’s top striker Artem Dzyuba and a new-born eagle after goalkeeper Igor Akinfeev, who saved two penalties against 2010 World Cup winners Spain in the previous round.

Russia’s president Vladimir Putin attended Russia’s opening day win over Saudi Arabia and has been in touch to support the home players.

“He has been calling me, he called me before and after the (last) game with Spain,” Russia coach Stanislav Cherchesov said. “When the president supports you that makes us comfortable and this is an extra boost for us in terms of motivation.”

The Bank of Russia has traditionally issued commemorative coins and notes for major events. Some of these notes, including 100-rouble bills in tribute to the 2014 Sochi Olympics, Moscow’s 2014 annexation of Crimea and the World Cup, are in circulation and in high demand among collectors.

After automatically qualifying as host country and entering the tournament as the lowest-ranked side, Russia reached the World Cup knockout stage for the first time in post-Soviet history after victories against Saudi Arabia and Egypt.

The team then went on to beat Spain, the 2010 World Cup champions, in penalty kicks in the round of 16 last week.