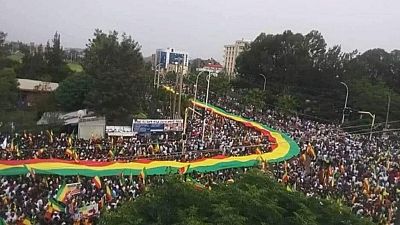 Ethiopia’s prime minister, Abiy Ahmed ahas asked his supporters to scale down on the massive rallies that have been held across the country, in support of ongoing reforms.

Abiy says Ethiopian people should instead focus on implementation of the development programs and guard against plots designed to create conflict among emerging states.

Last week, a massive rally was organised in Bahir Dar, the capital of Amhara regional state, in support of Abiy’s reforms.

HE PM Dr Abiy Ahmed conveys his heartfelt gratitude to organizers and participants of #Bahirdar largest and peaceful rally in support of the ideals of love, forgiveness, togetherness and the reform measures introduced so far. #Ethiopia pic.twitter.com/YtgiqBMc4L

Rallies were also held in several other cities including Debre Berhane and Woldia.

Last month, the prime minister attended a massive rally in the capital Addis Ababa that was organised to support his reforms. That particular rally was disrupted by a grenade explosion, which the state late explained was part of a plot to fail the economy.

Abiy has championed several economic and political reforms since he took office in April, with one of the more radical ones being a decision to make peace with Eritrea by accepting the resolutions of the 2000 Algiers Agreement that hands over the the disputed border town of Badme to Eritrea.

Despite being elected leader of the governing Ethiopian People’s Revolutionary Democratic Front (EPDRF) coalition, there has been reported disquiet from one of the four constituent parties.

The Tigray People’s Liberation Front, initially resisted the decision to make peace with Eritrea and also questioned Abiy’s decision to liberalise the economy.

Abiy in a press conference held on Tuesday, thanked several groups that have worked to minimise damage in several flaring conflicts in regional states across the country.

State broadcaster Fana Bc said Abiy thanked the youth in Gurage zone of SNNP regional state and the Sidama elderly for the effective reconciliation measures they implemented within a short period.

Also, following violence in Asoss, the capital of Benishangul Gumuz regional state that left up to 10 people dead, up to 11 police officers and four senior officials of the regional administration have been relieved of their duties.