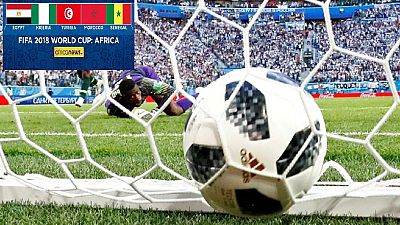 At half-time, Brazil and Switzerland are poised to qualify for the knockout stages.

Confirmation #SWE and #MEX progress to Round of 16.
How many of you predicted this table at start of the #WorldCup? pic.twitter.com/lfAmgW4pZ0

Paulinho scores in the 36th minute to give Brazil the lead.

But the ball is round, anything can happen, and I believe there will be chances for us.

Switzerland take the lead through Blerim Dzemaili who smashes the ball past a diving Keylor Navas.

The matches kick off here at the Spartak Stadium in Moscow and the Nizhny Novgorod Stadium.

Brazil will be hoping to avoid an embarrasing group stage exit. They need at least a draw against Serbia to qualify for the next stage, while Switzerland who take on Costa Rica also need the minimum of a draw to qualify.

Switzerland and Costa Rica are making their fifth World Cup appearances since 1990, and both got beyond the group stage in 2014.

Costa Rica who exited the last World Cup unbeaten in open play with a first ever quarter-final and counting wins aginst Uruguay and Italy, have been heavily criticised back at home following their premature elimination after just two games in Russia.

“I feel hurt and disappointed at the same time … People have said very uncomfortable things,” coach Oscar Ramirez said at a pre-match news conference at the Nizhny Novgorod Stadium, dismissing some calls on social media for him to resign.

“In our country, people are very emotional … But if they call me a coward and unbearable things … if they go for my family, then I will show the tiger inside.”

The Swiss, whose win over Serbia was dampened by accusation of politically motivated celebrations, will be looking forward to switching discussions back to football, where they need a draw to qualify.

Switzerland have lost only one of their last 24 matches.

Bothy teams can qualify with a win or draw depending on the results in the other Group E tie.

Brazil come into the game under fire at home after poor performances in their first two games.

They were subdued in their 1-1 draw against Switzerland and had to wait until injury time to finally secure the goals and the win against a limited Costa Rica side.

Full back Fagner believes the pressure is a result of their own spectacular showing leading up to the tournament, a period in which they lost only one match in 21, scoring 47 goals and conceding just five.

“I believe that because of all we did in the qualifiers and friendlies there is a huge expectation that we win our games,” Fagner told reporters at Brazil’s training camp.

The five-times World Cup winners have been criticised at home with striker Neymar bearing the brunt of the opprobrium.

The most expensive player in the world and a constant presence on billboards, television and social media, Neymar has not lived up to the hype and broke down in tears after the last-gasp win over Costa Rica.

The defending champions Germany have been eliminated after losing 0-2 to Korea Republic.

Sweden beat Mexico 3-0, but both teams qualify for the knockout stages.

The double-header matches kick off, here at the Kazan Arena and Ekaterinburg Arena.

Mexico coach Juan Carlos Osorio said his team would stick to its attacking style and play for a win against Sweden on Wednesday, even though a draw would be good enough to see them into the last 16 at the World Cup.

“I think that won’t change. We’re going to go out there to try and secure the three points,” he told reporters when asked about Mexico’s front-runner advantage.

“We still haven’t qualified properly, we haven’t confirmed our progress, but who would have said we would have had six points by now in this group?” he said.

Sweden can qualify with a victory or a draw against Mexico if Germany lose to South Korea. If Sweden and Germany both win, Andersson’s team could advance on goal difference.

Sweden’s coach Janne Andersson is hoping his team can take advantage of their prowess in set-pieces to overcome the lethal Mexicans.

“Let’s hope the height of the players will play a part because we’re good in those situations,” Andersson said, adding that he may not make too many changes to the team that started the last match.

“We showed in the matches against South Korea and Germany that we’re very good at set-pieces, both in attack and defence,” skipper Andreas Granqvist added.

Remarkably, Korean hopes of reaching the round of 16 are still alive despite losses in their first two matches but they must beat Germany by two goals and hope Mexico beat Sweden in Wednesday’s other Group F match.

Coach Shin Tae-yong was realistic about the chances of his team pulling off the feat but said they would take confidence from the fact that the Germans had also made a disappointing start to their campaign in Russia.

“To be honest, Germany are a lot stronger than us and it won’t be easy,” he told a news conference.

“But the ball is round, anything can happen, and I believe there will be chances for us. Mexico beat Germany in their match so there is hope for us. Although it’s likely that Germany will have more possession, we will do our best.’‘

Defending champions Germany will qualify if they win by two or more goals or better Sweden’s result against Mexico in the other Group F game being played at the same time.

If Germany and Sweden draw, then the team in the higher-scoring game will finish second. If both draws are with the same score, Germany finish second due to their head-to-head win over Sweden.

Today is another day that promises twists and drama at the 2018 World Cup in Russia as Group E and Group F play their final group stage matches.

In Group E, only one thing is certain, the elimination of Costa Rica, who lost their opening two games. The test of the teams in the group including five time world champions Brazil, Switzerland and Serbia will all be battling to get the two available qualification slots.

Group F is even more dramatic, since all the four teams have a chance at qualification if results go their way. Mexico, which stunned the defending champions Germant in the opening game, 1-0 is in the driving seat, needing just a draw in its final game to qualify, but Germany, Sweden and South Korea all have hopes of making it to the knockout stages.

The last couple of days have been nothing but dramatic…

Who's ready to do it all again? pic.twitter.com/P72pxbjNka