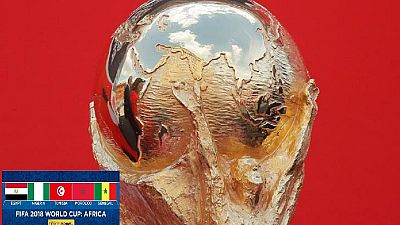 With the second series of World Cup group games completed on Sunday, qualification for the knockout rounds is now clearer.

The top two teams in each group go into the last 16. In the case of teams finishing level on points, FIFA has put in place seven tie-breakers starting with goal difference and then the number of goals scored in all group matches.

If two or more teams are equal on the basis of the above three criteria, their rankings are determined as follows:

Here is where things stand in each group going into final round-robin matches.

Russia and Uruguay are through and all that is left to decide is who will top the group when they meet on Monday. Russia have a superior goal difference so a win or draw will send the hosts through as group winners to face the runner-up in Group B.

Neither Egypt nor Saudi Arabia have any points but with the Saudis shipping six goals, anything but a win will see them finish last.

Spain and Portugal sit top of the group on four points with Iran on three and Morocco eliminated with no points so far.

Spain and Portugal are also level on goal difference and goals scored and, since they drew, if their final results are the same the group could be decided by fair play points.

Spain have the advantage at the moment with one booking against the two of Portugal.

Portugal need at least a point from their final match against Iran to guarantee a place in the knockout round. Iran would secure their spot with a win and could also go through with a draw if Spain lose to Morocco.

The winner of Group B plays the runner-up in Group A, either Russia or Uruguay.

France, on six points, top the group and have secured passage to the next round but will need a point against second-placed Denmark (four points) in their final match to clinch first place. Denmark could finish first, second or third.

A Denmark loss coupled with an Australia win over Peru, who have yet to earn a point, could see the Socceroos sneak through on goal difference. Since Denmark and Australia drew, they too could be split by fair play.

Australia, with three yellow cards, currently have the edge in this respect on the Danes, who have four.

Peru have been eliminated but will finish third with a win.

The winner of Group C will meet second place in Group D.

All sorts of outcomes are possible here with Croatia, on six points, through but the other three teams still in the hunt.

Croatia will top the group if they beat or draw with Iceland.

Nigeria, on three points, will secure their spot in the last 16 with a victory over Argentina, who sit bottom of the group on one point behind Iceland on goal difference.

A draw may also be enough for Nigeria even if Iceland beat Croatia, depending on goal difference.

To go through, Argentina need to beat Nigeria while hoping Iceland lose to or draw with Croatia. If Iceland and Argentina both win, to move to four points, they will be split by goal difference.

Iceland must win to have any chance but also need the other results to go their way.

The Group D winner will face the Group C runner-up.

Only one thing is certain in Group E and that is Costa Rica, without a point, will be going home.

Brazil’s last-gasp win over Costa Rica took them alongside Switzerland on four points, with Serbia on three.

Wins or draws for Brazil against Serbia and Switzerland against Costa Rica will send both through.

Serbia must beat Brazil to qualify but a draw could see them through if the Swiss are beaten by Costa Rica by more than one goal.

The winners of Group E face the second-placed team in Group F.

This was another group that changed dramatically after a stoppage-time goal as Germany, facing potential elimination, pushed themselves right back into the mix by beating Sweden.

Mexico, on six points, are in the driving seat, with Germany and Sweden both on three.

Mexico will qualify with a win or draw against Sweden. They can also move on with a loss to the Swedes if Germany lose to or draw with South Korea, who have no points.

Germany will go through with any win should Sweden fail to beat Mexico.

Another scenario could see Germany advancing on a better goal difference with a victory over South Korea even if Sweden beat Mexico.

Sweden can qualify with a win over Mexico and a Germany loss to South Korea. If both Sweden and Germany win it is possible for the Swedes to advance on goal difference.

Despite two losses South Korea still have a slim chance of advancing but they would need to beat Germany and hope both that Sweden lose to Mexico and that the goal difference goes their way.

The winner of Group F will meet the runner-up in Group E.

England and Belgium are guaranteed to progress but their finishing positions will be decided by their meeting on Thursday.

Both on six points, they have identical goal totals so a draw would mean top spot going to the best-behaved team. England are currently on two yellows to the three of Belgium.

Tunisia and Panama have no points ahead of their meeting, where a draw would secure third place for the North Africans.

Japan and Senegal will advance with draws against Poland and Colombia respectively. Should Senegal and Japan both draw with the same score, they will be split by fair play; Senegal have five yellow cards to Japan’s three.

Colombia will progress if they beat Senegal and a draw will suffice if Poland beat Japan. Poland have been eliminated.

The top two teams in the group will face either England or Belgium.