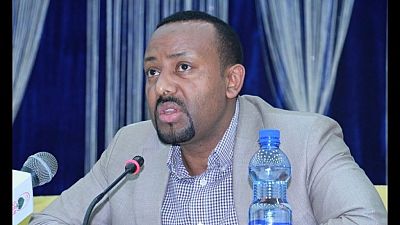 An explosion disrupted a huge rally for Ethiopia’s new, reformist prime minister on Saturday shortly after he spoke and was waving to the crowd that had turned out in numbers unseen in recent years in the East African nation.

The state broadcaster reported that a few people had been injured, and police said they were investigating. Footage showed Prime Minister Abiy Ahmed being rushed from the scene by security guards.

The grenade attack at #Ethiopia’s new PM Abiy Ahmed in capital Addis Ababa rally is a sign that the elite who enjoyed power for decades aren't happy with his unity program.

“It was a grenade. Someone tried to hurl it to the stage where the prime minister was in,” Seyoum Teshome, a member of the organizing committee, said.

#Ethiopia PM Abiy Ahmed addresses a massive rally in Addis Ababa, demo to show support for his reform agenda. He showed up at the march wearing a t-shirt with a map of Africa and Mandela's famous “power” salute. pic.twitter.com/5GFS058NjE

In a cowboy hat and T-shirt, Abiy had addressed the crowd in Addis Ababa’s Meskel Square as supporters wore clothes displaying his image and carried signs saying “One Love, One Ethiopia.”

Abiy told the crowd of tens of thousands that change was coming and there was no turning back.

“For the past 100 years hate has done a great deal of damage to us,” he said, stressing the need for even more reforms.

BREAKING: At the rally in Addis Ababa, right after PM Abiy's speech there was a bomb explosion according to the state owned ETV. Sources say the PM is fine.

#Ethiopia: Livestream of the political rally in Addis Ababa just ended abruptly after what sounded like an explosion.

The 41-year-old Abiy took office in April and quickly surprised Africa’s second most populous country by announcing the release of tens of thousands of prisoners, the opening of state-owned companies to private investment and the unconditional embrace of a peace deal with rival Eritrea.

The United States is among those expressing support for the changes in a key security ally.

“I’ve never thought this day will come in Ethiopia. I’m very emotional right now,” said Mulugeta Sema, a supporter of Abiy who wore a T-shirt with the new leader’s image. “We should never get back to dictatorship. This is time for change.”

#BREAKING: An explosion has shaken a rally for #Ethiopia's new PM #Abiy Ahmed which was being attended by thousands of people in #Addis Ababa.