Senegal claims first African win, as Salah's return is not enough to save Egypt 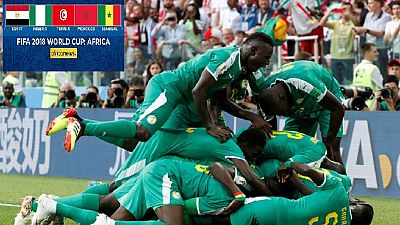 Senegal became the first African team to win a match at the 2018 World Cup on Tuesday when they beat Poland 2-1, helped by an own goal from a Brazilian-born Polish defender and a nightmare moment for goalkeeper Wojciech Szczesny.

Thiago Cionek stuck out a leg and deflected Idrissa Gueye’s wayward shot into the net to give Senegal the lead with game’s first shot on target in the 37th minute.

The second goal was even more of a gift for the Lions of Teranga, who were making their first appearance at the World Cup since reaching the quarter-finals in 2002.

You saw a very solid, very compact Senegal team. We were able to put them under pressure.

Poland midfielder Grzegorz Krychowiak played the ball back from inside the Senegal half but the defence failed to notice that M’Baye Niang, who had been on the touchline receiving treatment, had re-entered the field.

Szczesny rushed out of his area to try and intercept but Niang got to the ball first, slipped it past him and scored into an empty net amid Polish disbelief.

“The player ran in, he was behind the side line of the pitch. There are no such situations on a daily basis,” said Poland defender Michal Pazdan.

“It does not change the fact that we lacked concentration at the beginning of the second half, because it seems that we could have played a different game, if they hadn’t scored 2-0.”

Niang, who at 23 has already played for Caen, AC Milan, Montpellier, Genoa, Watford and Torino, said:

“I saw a ball coming back from the Polish defence. I felt there was something on and was able to get in there and score.”

Krychowiak replied with an 86th minute header but it was too little for the Poles who are now in danger of repeating the group stage exit they suffered on their last appearance at the finals in 2006.

The win put Senegal and Japan, 2-1 winners over Colombia earlier on Tuesday, level on three points at the top of Group H.

It was a relief for Africa after Egypt, Morocco, Nigeria and Tunisia all lost their opening games. Egyp whose star player Mohamed Salah returned for the game against Russia, lost 3-1 to the hosts on Tuesday.

Senegal, with 10 European players in their starting line-up, played like a European side, with a well-drilled backline led superbly by Napoli defender Kalidou Koulibaly who largely subdued Poland’s record scorer Robert Lewandowski.

“Senegal won due to discipline,” said coach Aliou Cisse, who captained the side in 2002.

“You saw a very solid, very compact Senegal team. We were able to put them under pressure. Every time they made a mistake we were able to find the movement we needed and get back at them.”

Despite Krychowiak’s late reply, Poland never really looked like snatching a point and must now pick themselves up for the match against Colombia on Sunday.

“I don’t think any excuse is good enough for the first half. We weren’t aggressive enough, the wingers didn’t do a good job and neither did the midfield,” said disappointed Poland coach Adam Nawalka. “We weren’t dynamic or co-ordinated.”