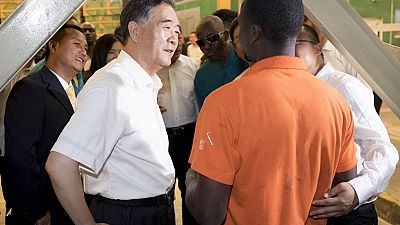 At his meeting with President Museveni, Wang said Chinese President Xi Jinping and the Ugandan president have met on multiple occasions and charted course for the future development of bilateral ties. Wang welcomed Museveni to attend the Beijing Summit of the Forum on China-Africa Cooperation (FOCAC) to be held this September.

Wang said he paid his first visit to Uganda as the chairman of the CPPCC National Committee to implement the important consensus reached by both presidents and promote the development of bilateral ties.

China is currently striving for the realization of “Two Centenary Goals” under the guidance of the Xi Jinping Thought on Socialism with Chinese Characteristics for a New Era, while Uganda is committed to its national development plan “Uganda Vision 2040,” Wang said, calling on both countries to dovetail their development strategies and cooperate in the framework of the FOCAC and the Belt and Road Initiative.

Calling China and Africa a community with a shared future and shared interests, Wang said China firmly supports African countries’ choices of development paths that are suitable to their national conditions, including that of Uganda.

Hailing the traditional deep-rooted friendship between Uganda and China, Museveni said the older generations of Chinese leaders had always stood together with the Ugandan people in the process of anti-colonial struggles and national independence.

The 10 cooperation projects announced by President Xi at the FOCAC Johannesburg Summit in December 2015 have provided new opportunities for Uganda to realize economic transition and medium- and long-term development, said Museveni.

Expressing his satisfaction with the Uganda-China cooperation, Museveni said he looks forward to meeting Xi during the FOCAC Beijing Summit to draw the blueprint for the bright future for Africa-China relations.