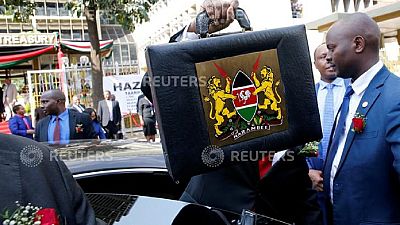 Kenya’s Finance Minister Henry Rotich on Thursday said he would propose repealing a cap on commercial lending rates, as he presented a budget including a new tax on financial transactions.

“I propose to amend the Banking Amendment Act 2016 by repealing section 33b of the said act,” he said, referring to the section of the law that sets the cap on interest rates for commercial lenders.

This is to enable banks and lenders to provide more credit, especially to the borrowers they consider riskier.

“This is to enable banks and lenders to provide more credit, especially to the borrowers they consider riskier,” he said.

Rotich targeted a budget deficit of 5.7 percent of GDP for the financial year starting next month, less than the 7.2 percent budgeted for 2017/18.

“I propose to introduce a Robin Hood tax of 0.05 percent of any amount of 500,000 shillings or more transferred through banks or other financial institutions,” he said in a presentation to parliament.

The government of the East African nation has been criticized in recent years, including by the International Monetary Fund, for ramping up borrowing for infrastructure investments, including a new railway completed last year.

Uganda to raise spending by 13%

In Uganda, the finance minister Matia Kasaija said the country expects economic growth of at least 6 percent in 2018/19 (July-June) from 5.8 pct in 2017/18, partly helped by public infrastructure investments.

Rwanda’s Uzziel Ndagijimana presented a Rwf2.44 trillion ($2.8bn) budget, saying the economy is expected to grow by 7.2% this year. The budget will be financed 67.5 per cent through domestic resources, 16 per cent loans and 16 per cent grants.

Tanzania’s Philip Mpango presented a budget of Tsh32.48 trillion ($14.3b), also declaring that the economy will grow by 7.2%. Notable tax announcements included the removal of tax on sanitary pads to make the product more readily available for school girls and rural women.

Gaming taxes were increased while a proposed amendment of Income Tax Act to reduce corporate tax to 20 per cent from 30 per cent for new investors in pharmaceutical and leather industries will be welcomed by investors.