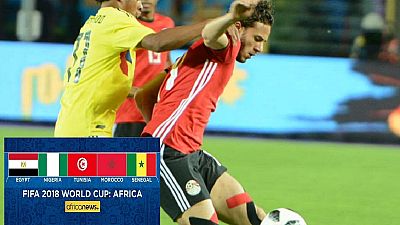 Mohamed Salah’s absence is affecting Egypt’s World Cup preparations, coach Hector Cuper said after the team played out a goalless draw with Colombia at the start of the weekend.

“We are working to cover the absence of Salah. The players responded perfectly to our instructions, but Salah’s absence affects any team negatively,” Cuper said after Friday’s goallesss draw in Bergamo, Italy.

The draw means Egypt have now gone five games without victory, stretching back to last October.

We are trying to solve this problem with nutrition experts, to avoid the negative effects of the players abstaining from food and water for a large number of hours.

Salah is still in doubt for Egypt’s opening match in Group A on June 15 against Uruguay in Ekaterinburg after suffering a shoulder injury in the Champions League final for Liverpool late last month.

He also missed Egypt’s draws with Kuwait on May 25, as he was still preparing for the final against Real Madrid.

Salah will also not be in the line-up against Belgium in Brussels on Wednesday when the Egyptians conclude their preparations before heading to Russia.

Egypt last won against Congo last October in the World Cup qualifiers and since then have drawn with Ghana, been beaten by Portugal and Greece in March, and also drew their last two matches.

But Cuper saw positives in Friday’s draw against Colombia.

“The result was good, especially as the players’ performances were affected by the fact that they were fasting,” Cuper said, referring to the Islamic month of Ramadan during which Muslims fast during daylight hours.

SUGGESTED READING: ‘Mohamed Salah is ready for Champions League final, whether he is fasting or not’: Klopp

“We are trying to solve this problem with nutrition experts, to avoid the negative effects of the players abstaining from food and water for a large number of hours.’‘

“I’m most worried about turning from defence to attack as quick as we can. We’ve tried to achieve satisfactory form especially playing against a big team like Colombia. The draw was a good result but we want to win in the coming matches.”

The seven-time African champions are in Group A at the World Cup, taking on hosts Russia on June 19 in their second game before going up against Saudi Arabia on June 25.

Egypt make their first World Cup appearance since 1990, when they were eliminated at the group stage.