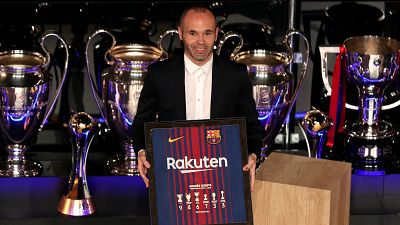 Andres Iniesta was givne a special farewell from Barcelona on Friday (May 18) as he prepares to say goodbye to the club on Sunday.

Champions Barca will look to give Iniesta the perfect send-off when they host Real Sociedad on Sunday in La Liga’s final round of matches.

The club will pay an emotional tribute to their captain, with an elaborate mosaic reading ‘Infinite Iniesta’ in Catalan displayed by fans in their Nou Camp stadium.

The midfielder, 34, announced last month that he would leave the club he has been at since the age of 12, with local media reporting he will move to China in the close season.