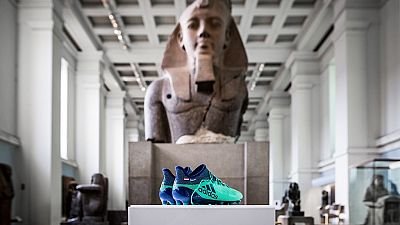 Egypt and Liverpool forward, Mohamed Salah, has been honored by the British Museum in London, after an impressive record breaking season in the English Premier League.

Salah, who became the all time top scorer in the league with 32 goals, won the PFA Player of the year award among many other accolades.

Salah has scored 44 goals in 51 appearances in all competitions this season, and will get the chance to add to that tally when Liverpool face Real Madrid in the Champions League final on May 26.

The boots tell a story of a modern Egyptian icon, performing in the UK, with a truly global impact.

The ‘Egyptian Pharoah’ as he is fondly called by his fans at Liverpool will now have his boots displayed in the museum’s Egyptian collection.

“The boots tell a story of a modern Egyptian icon, performing in the UK, with a truly global impact, and build on our recent project to acquire objects to tell the story of daily life in 20th and 21st century Egypt” said exhibit keeper Neal Spencer.

We’ve made an exciting new acquisition! To celebrate Egyptian footballing star MoSalah being top scorer in the Premier League this season, we’ll be displaying his boots alongside objects from ancient Egypt in the run up to the Champions League final ⚽️? pic.twitter.com/DBZDW5Q6kD

The boots will be displayed alongside other artifacts from ancient Egypt.

Salah will be leading Egypt’s national team at the World Cup in Russia, where he will have yet another platform to make a case for his consideration for the prestigious Ballon D’Or honour.

Salah has scored 33 goals in 57 appearances for his country including a crucial double in the win that clinched Egypt’s spot in the World Cup.