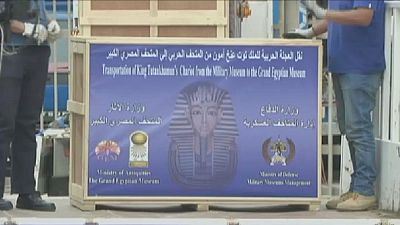 The last military chariot of King Tutankhamun was moved on Saturday from a military museum in Cairo to the under-construction Grand Egyptian Museum (GEM) near the Pyramid complex in Giza.

A total of six historical chariots were collected from museums across Egypt, including the Luxor Museum and the Egyptian Museum in Tahrir Square and will be displayed at the GEM, which is scheduled to open later this year.

This is the sixth chariot belonging to King Tutankhamun that has moved to the new museum. Young Egyptians have gained a lot of experience in the ancient safe transportation.

King Tutankhamun, who died at about 19, became the world’s best known pharaoh of ancient Egypt after his nearly intact tomb was discovered by the British Egyptologist Howard Carter in 1922. The six military chariots were found in the antechamber of his tomb.

In addition to these chariots, other objects found in the tomb include sarcophagi, objects of everyday life, the funeral mask of the King in solid gold, and the mummy of the young pharaoh.

“4,800 out of 5,398 pieces of Tutankhamun’s treasures have already been moved to the GEM. We have also moved 122 pieces of his treasures that used to be on display at the Luxor Museum,” said Moustapha Waziri, chairman of the Supreme Council of Antiquities.

At the ceremony for moving Tutankhamun’s chariot, Egyptian Minister of Antiquities Khaled Anani said that more than 43,000 pieces of Egyptian antiquities have already been moved to the GEM, the most famous of which is the statue of King Ramses II.