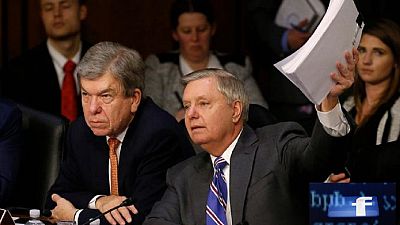 A US Republican senator has come under fire from social media users after he told Facebook CEO Mark Zuckerberg to use English and not Swahili during a Senate hearing on Tuesday.

Senator John Kennedy, a Republican from Louisiana, was questioning Zuckerberg on Facebook’s user agreement, which he said is too complicated, is designed to protect Facebook and not to inform users of their rights.

Zuckerberg had been summoned by the US senate in the wake of revelations that data firm Cambridge Analytica improperly accessed the information of 87 million Facebook users.

I am going to suggest to you that you go back home and you rewrite it and tell your lawyers that you want it written in English and not Swahili, so the average American can understand it.

Senator Kennedy asked Zuckerberg to instruct the company’s lawyers to write a user agreement that is not in Swahili.

“I am going to suggest to you that you go back home and you rewrite it and tell your $1,200-an hour lawyers, no disrespect, they’re good, but tell them that you want it written in English and not Swahili, so the average American can understand it. That would be a start,” Senator Kennedy told Zuckerberg.

Social media users have criticized the senator for the “Swahili” reference, calling it a racial slur.

Swahili is not an acceptable metaphor for tech lingo you don’t understand. Swahili is a language spoken in Eastern African countries. It is a trade language merging Arabic and Bantu languages originating in Zanzibar a millennia ago. Just in case anyone was wondering.

As a native Swahili speaker, SenJohnKennedy , I find your unnecessary disparaging of the language distasteful. Not sure if your intent was to appear more intellectual or to pucker up a punchline against Mark Zuckerberg, but you missed by a wide margin . Shame on you!

A sitting U.S. senator just told Zuckerberg that Facebook’s user agreement needs to be written in “non-Swahili.” Racial microagressions, much? Swahili is no more confusing than French or German. But clearly, African languages are SO DAMN CONFUSING.

While Facebook’s user agreement is understandably complicated for users of the application in the United States, it is equally confusing for the millions of its users outside the US who include almost 100 million Swahili speakers in East African nations like Kenya and Tanzania.

Swahili has grown to be Africa’s most ‘internationally recognized language’ and was adopted by the African Union as an official language in 2004.

The senator later told CNN ‘there is nothing to apologize for. I think everyone understood the point I’m trying to make’, when told about the outrage his remark caused.