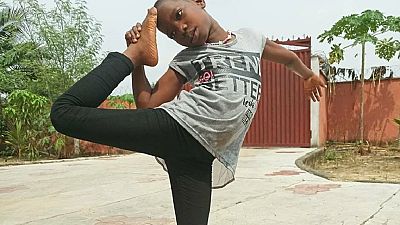 Popular Nigerian child comedian Emmanuella Samuel has announced that she is to feature in a Walt Disney project.

The seven year old broke the news to her fans on her Instagram account, posting a picture of herself on set.

Thanks disneystudios God bless everyone whose support has added to bringing us here. I never dreamed of being here so soon. I miss Success. I love you all.

The comedian who has put smiles of millions of fans around the world, then went on to crack a joke about her costume.

we will talk about the great man I’m standing with later. Now Biko can somebody tell the costume department to please package me well. Worris dis? What character am I playing today? “Ngkbeke in America?”

Emmanuella stars as one of the characters in a hugely successful comedy channel on YouTube, Mark Angel Comedy.

Many congratulated her on social media, with Nigerians particularly calling the Disney project a stamp of approval that should silence all who doubted her talent.

Congratulations Emmanuella! Make sure you make them laugh over there.

Your story is an inspiration. Come by the NGRSenate sometime, let’s discuss how we can develop the potential of our young talents in the creative industry.

They said she wasnt funny

Emmanuella is working with Disney. She has a YouTube Gold award, is a FreshYo Ambassador, has starred in an advert for Wikipedia and hosted Nickeledeon’s Nick Fest show. She also made Mark Angel Comedy the most subscribed YouTube channel in Nigeria. This child is blessed.

In 2016, Emmanuella was awarded the Best New Comedienne and Princess of Comedy at the Afro-Australia Music and Movie Awards in Australia while Mark Angel Comedy won Best Sub-Saharan Channel at the YouTube Awards in 2017.