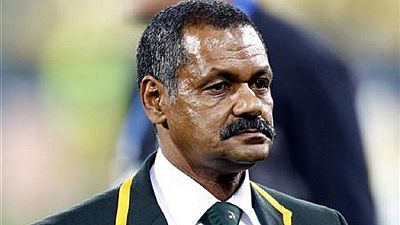 Former South Africa rugby coach Peter de Villiers has been appointed the Director of Rugby and coach of the Zimbabwe team, his first high-profile job since a successful spell with the Springboks.

De Villiers has a two-year contract with Zimbabwe and on Wednesday, he took on the challenge of getting the southern Africans back to the Rugby World Cup next year for the first time since 1991.

“This is the greatest day of my life for one reason only, because people believe in me,” the 60-year-old de Villiers said in Zimbabwe.

This is the greatest day of my life for one reason only, because people believe in me.

Zimbabwe was the first African team to play at the World Cup, in 1987 and 1991 while South Africa was still isolated from international sport because of apartheid.

But Zimbabwe hasn’t been back at the sport’s showpiece since, overtaken by a number of other countries as Africa’s next best after the Springboks.

De Villiers’ time as coach of the Boks from 2008-11 was relatively successful despite doubts over a perceived lack of previous experience.

The first non-white to coach South Africa, de Villiers led the team to a series win over the British and Irish Lions and a southern hemisphere title in 2009, and yet never really won over the South African public.

He was sacked after South Africa’s controversial 11-9 loss to Australia in the quarter-finals of the World Cup seven years ago.

The arrival of a former Springboks coach is a big moment for Zimbabwe, but it also marks a return for de Villiers, who hadn’t worked in top-level rugby since leaving the Springboks after the 2011 World Cup.

The criticism he received while coaching South Africa appeared to have stunted his career.

His tendency to make controversial comments didn’t help, either, once accusing New Zealand’s team of cheating and appearing to defend one of his players for eye-gouging.

“No one will ever wave the magic wand for us to become a force in world rugby,” Jani said. “It is up to us as a team and as a country to start believing in ourselves.”

Zimbabwe will play a round-robin set of qualifiers for the World Cup with five other African nations, including favourites Namibia, Kenya, Morocco, Tunisia and Uganda.

“I can’t promise we will win everything,” de Villiers said. “The only promise is that we will prepare, not only prepare, but we will be ready.”

The top team will be assured of a place in the 2019 World Cup in Japan, where they will face New Zealand, South Africa and Italy in Pool B, while the second-placed side will enter the Repechage stage that involves further play-off games against teams from Asia, South and North America and Europe.