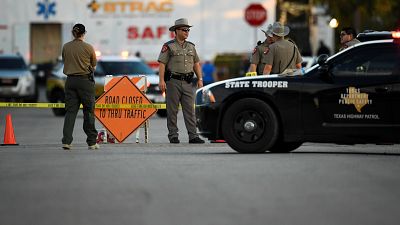 Authorities in Texas have named 26-year-old Devin Patrick Kelley as the gunman in the attack at the First Baptist Church which killed 27 people and left dozens more injured.

Media reports say Kelley was thrown out of the Air Force for allegedly assaulting his wife and child.

According to eyewitnesses, he entered the church in combat gear at around 11.30 am on Sunday morning firing multiple shots into the congregation. The suspect was engaged by Johnnie Langendorff, a local resident, as he left the church and fled the scene in a silver SUV.

Langendorff set off in pursuit of the suspect. “He hit the ditch. The gentleman that was with me got out, rested his rifle on my hood, and kept it aimed at him, telling him to get out, get out,” he said. “There was no movement. There was none of that. The guy didn’t put up a fight or anything.”

US President Donald Trump is in Japan on a 12-day Asian trip. He said he was monitoring the situation.

“I think that mental health is your problem here,” he said. “This was a very, based on preliminary reports, a very deranged individual, a lot of problems over a long period of time. We have a lot of mental health problems in our country, as do other countries, but this isn’t a gun’s situation.”

The victims, ranging in age from five to 72 years old, include the 14-year-old daughter of the church Pastor. One couple said they lost eight extended family members, including their pregnant
granddaughter-in-law and three of her children.