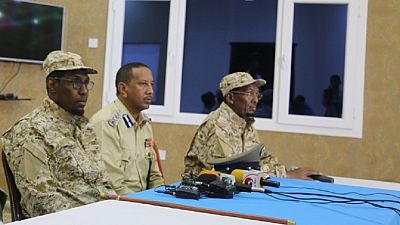 Somali Defense Minister Abdirashid Abdullahi Mohamed and the chief of the armed forces General Mohamed Ahmed Jimale have have resigned from the government as the country battles Islamist group al Shabaab.

Information Minister Abdurahman Omar Osman confirmed the resignations on Friday after they were submitted at a cabinet meeting on Thursday.

The reason for the resignations were not disclosed but local media cited rivalry between the two top defense figures.

Somalia is battling Islamist group al Shabaab which is fighting the government and foreign forces to take control of the country and impose a strict version of the Sharia law.