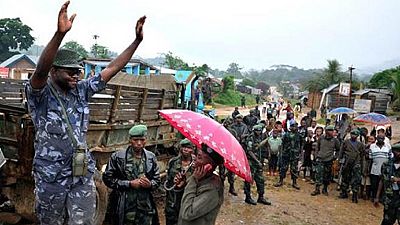 One of Democratic Republic of Congo’s most notorious warlords, Ntabo Ntaberi Sheka, wanted for alleged crimes against humanity, surrendered to U.N. peacekeepers on Wednesday, the U.N. mission in Congo (MONUSCO) said.

Sheka’s militia, Mai-Mai Sheka, is one of a patchwork of armed groups in eastern Congo regularly accused by the United Nations and rights groups of using rape as a weapon of war.

After six years on the run, Sheka surrendered to U.N. forces in the town of Mutongo in Walikale territory and was transferred to the eastern city of Goma, said MONUSCO spokeswoman Fabienne Pompey.

It was not immediately clear why he had turned himself in but his forces have been locked in a losing combat in recent years with a rival militia led by a former lieutenant.

“He will be handed over to DRC authorities after the regular procedure and checking is done by MONUSCO,” Pompey told Reuters.

Despite the 2003 end to years of war in eastern Congo that killed millions, mostly from hunger and disease, dozens of armed groups continue to operate there, exploiting vast mineral reserves and preying on the local population.

According to the United Nations, Sheka’s forces and two other armed groups raped at least 387 civilians between July 30 and Aug. 2, 2010 to punish them for alleged collaboration with Congolese government forces.

“Thousands of civilians in eastern Democratic Republic of Congo have been affected by crimes committed by forces under … Sheka’s command. His surrender today brings hope for justice and a reprieve from the violence,” Human Rights Watch’s Central Africa director, Ida Sawyer, said in a statement.

Congolese authorities issued a warrant for Sheka’s arrest in January 2011 but despite military operations against his group and several meetings with government and U.N. officials who urged him to surrender, he remained a free man.

In 2015, Human Rights Watch said Sheka’s forces had killed at least 70 civilians since the arrest warrant was issued, many of whom were hacked to death by machete and whose body parts were paraded around town as the fighters chanted slurs against rival ethnic groups.