'16 dead' after US military plane crash 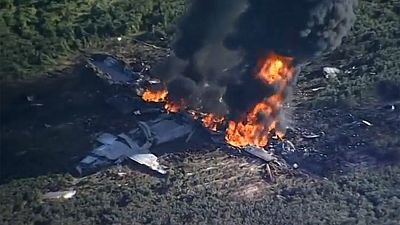 A military plane has crashed in the US state of Mississippi killing at least 16 people, according to officials.

The US Marine Corps aircraft came down in a rural area north of Jackson .. leaving a field of debris five miles in radius.

A local sheriff said most of the dead were Marines. He did not confirm whether civilians had been on board the plane.

In a statement, the Mississippi governor said “Our men and women in uniform risk themselves every day to secure our freedom.”

A USMC KC-130 mishap occurred the evening of July 10. Further information will be released as available. pic.twitter.com/QEFhooJZmC