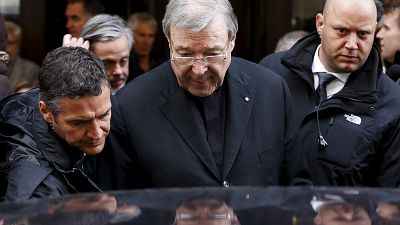 Cardinal George Pell is the highest-ranking Vatican official to be charged in the Catholic Church’s long-running sexual abuse scandal.

“Cardinal Pell like any other defendant has a right to due process…it’s important it’s allowed to go through unhindered and allowed to see natural justice is afforded to all the parties involved including Cardinal Pell and the complainants in this matter.”

No specific details of the allegations were given at the news conference, but two men, now in their 40s have said that Cardinal Pell touched them inappropriately at a swimming poll in the late 1970s when Pell was a senior priest in Melbourne, according to the Associated Press news agency.

Pell has issued a statement in which he denies the charges. He has been ordered to appear in Melbourne’s Magistrates Court on July 18.

Child sexual assault survivor advocate Chrissie Foster said it was right that the allegations would now be heard in the courts, reports Australia’s ABC news.

“I’ve been waiting to see what happens with this investigation for a long time,” she told ABC.

Ms Foster’s daughters Emma and Katie were raped by Melbourne paedophile priest Father Kevin O’Donnell when they were in primary school in the 1980s, ABC reports.