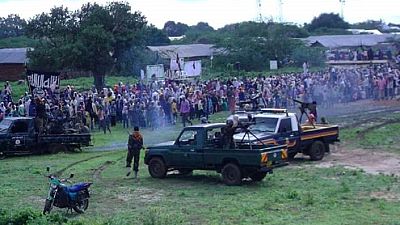 Somalia’s insurgent group al-Shabaab released photos of its fighters on display during this year’s Eid celebrations.

The photos have, however, got Kenyans talking, seeing that Kenyan Police cars had been turned into the machine gun carrier of al-Shabaab.

The military display according to media sources took place in Jilib. It is located on the main road from Mogadishu south to Kismayo and is the most populous town in the Middle Juba Region. Jilib is a town with an estimated population of approximately 125,000 Bantu ethnic group

Al-Shabaab holds large swathes of land in rural areas in Somalia have also launched attacks on Kenya. The Garissa and West Gate mall attacks are the most notable ones.

They are also engaged in active combat with Kenyan soldiers who are helping the Mogadishu government to fight them. They have often times released videos that show them taking over logistics of Kenyan forces after attacks.

#Alshabaab displays its fighters on Eid Day in Jilib. Note the Kenya Police Vehicle turned into a technical ferrying the militants #Somalia pic.twitter.com/qaMZEHoriX