Can you dance more than Botswana's President Khama? [Video] 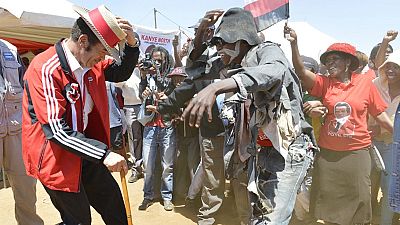 Botswana’s President Ian Khama couldn’t resist a dance over the weekend when local tunes were played with a piano at a tourism event in the capital Gaborone.

A 49 seconds video posted on Youtube showed the president dancing at the grounds of the Khawa Dune Challenge & Cultural Festival which is an annual motorsport and cultural event in the country.

The dance followed President Khama’s victory in one of the motor bike riding challenges which he has been winning for the past seven years except last year.

Khama has been caught by the cameras several times dancing at events.

Watch President Ian Khama dance his feet off in the video below.