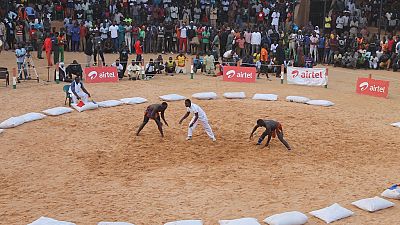 The 8th edition of the annual tournament initiated in 2008 will start on Friday with hundreds of African traditional wrestlers and officials in attendance, ECOWAS announced in a statement.

“As part of the preparations for a hitch free and quality tournament, twelve traditional wrestling referees and officials drawn from member States of the Community, are presently undergoing practical refresher training in Dakar,” the statement added.

Besides Cape Verde, all member states of the ECOWAS are competing in both individual and team events under five different weight categories – 66kg, 76kg, 86 kg, 100kg and 120kg.

Traditional wrestling is popular in West Africa especially in Senegal, The Gambia, Nigeria, Niger, Burkina Faso, Ivory Coast and Togo where the sport is more organized with national tournaments, federations and arenas.

The ECOWAS tournament has evolved and adopted modern techniques and rules such as doping tests integrated since 2013.

Officials also undergo training ahead of the tournament and judges have the opportunity to watch videos of fights to determine whether a fighter has cheated.

Fighters continue to wear amulets, charms and recite incantations believed to offer magic powers to propel them to win. This is legal and an integral tradition of the sport.

Nigeria won the first ECOWAS tournament held in Dakar in 2008.

Thousands of enthusiasts watch the competitions which are broadcast on television and radio to millions of people in the continent.

Several other national and regional tournaments have been in existence besides that of ECOWAS, and the French-speaking West African countries dominate the competitions.

Rules of the Sport

Two fighters wearing loincloths face off in a 20-meter circle filled with sand. They enter the circle in style with praise singers and an entourage showing off the power of the wrestler.

The matches are about 12 minutes long a fighter loses if he falls or even touches the ground with a knee.

If neither wrestler falls, both lose the match except in the final where the match continues until there is a winner.

Punching, biting and grabbing the loincloth are prohibited.

Winners get thousands of dollars and are idolized in their countries after competitions.