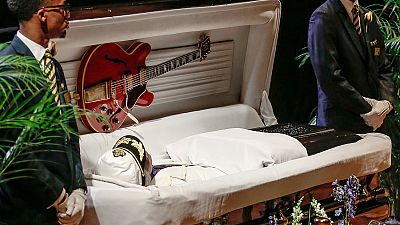 Family and friends gathered at the Pageant Theater in St. Louis to bid farewell to Rock and Roll legend Chuck Berry.

As fans earlier filed past the open coffin – which had a red Gibson guitar bolted to the lid – a musician played some of the dead star’s most memorable compositions, including Johnny B Goode, Sweet Little Sixteen and Roll Over Beethoven.


Berry died last month at his Missouri home aged 90. He is considered to be one of the pioneers of rock and roll influencing generations of succeeding musicians, most notably The Beatles, the Rolling Stones and the Beach Boys.