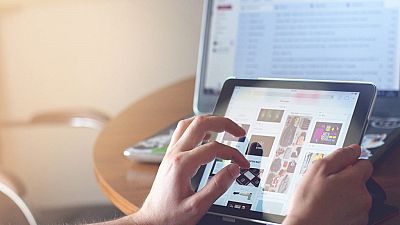 “I understand the reasons for security,” said Debbie Corfield, a Briton met at the Doha airport in Qatar, a platform targeted by the American ban.

But, “the problem is that when I need to work onboard, my working time will be reduced,” says the consultant for an American company that specializes in medical software that visits the states at least three times a year -United States for professional reasons.

According to her, her company and many of her colleagues will be “affected” by the US measure.

At the Dubai airport, one of the busiest in the world, staff of the national company Emirates was deployed en masse Saturday to explain to passengers the ban and present “recreational activities” planned after registration.

The ban comes into force over a peak weekend with 1.1 million passengers expected between Friday and Sunday.

In this airport that hosts the largest number of international passengers on the planet, some parents were gray mine.

“I have two children and they always have an Ipad in hand,” sighs Samuel Porter, who travels with his family.

Washington has banned carrying laptops and tablets in cabins on planes carrying the flights of nine airlines from ten international airports in Arab countries and Turkey, citing a risk of attacks.

The eight countries whose airlines and airports are concerned are all allies or partners of the United States: Turkey, Jordan, Egypt, Saudi Arabia, Kuwait, Qatar, United Arab Emirates and Morocco.

The United States did not specify the duration of the ban, but Emirates airline, based in Dubai, told AFP that it had been ordered to apply it until October 14.

And even those who thought to escape by buying computer or tablet in the duty-free shops will be disappointed, said DubaiEye radio president Paul Griffith airport, the latter also being subjected to the interdiction in the cabin.

To try to calm the dissatisfaction of its customers very attached to their portable screens, Emirates, has set up a special free service allowing to use electronic objects until the embarkation.

The stakes are high for this company which operates 18 daily flights to the United States from Dubai. Turkish Airlines did the same from the airports of Turkey.

In Dubai on Saturday morning, however, some passengers found replacements at the shelves. “I took two books. It’s been a long time ! Exclaims a lady.

For its part, Abu Dhabi, airport of the Emirates also struck by the American prohibition, tries to seduce the passengers by other advantages.

The national company Etihad stresses that if they can not benefit from their shelves in flight, travelers to the United States can pass all immigration and customs controls from Abu Dhabi, one of the only airports in the world To benefit from this service.

“So they no longer need to queue when they arrive in the United States,” Etihad told AFP.

In Doha, Qatar, other passengers wanted to be fatalistic. “It’s the rule and I respect the rule, it’s not very serious,” says Rakan Mohammed, a Qatari who suffers more from the ban on smoking.

In the wake of the United States, the United Kingdom announced on Tuesday a nearly similar ban affecting Turkey and five Arab countries – Lebanon, Jordan, Egypt, Tunisia and Saudi Arabia.

These prohibitions, which are not applied by other countries affected by attacks such as France, have been highly criticized.

Some point to the fact that they only target Muslim countries, other commentators felt that it was a form of protectionism for the United States while American companies are complaining about the competition of their counterparts Of the Gulf.

On Friday, Tunisia targeted by the London measures convened the ambassador of the United Kingdom to complain about this “unwarranted” measure.

“The airports of Tunisia follow the same security measures as those applied to the Heathrow airport in London,” insisted Tunis.