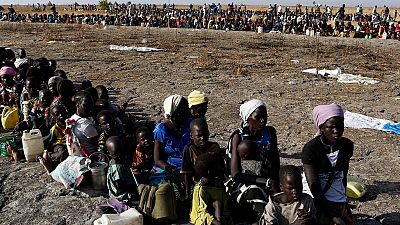 The United States has accused South Sudan’s government of deliberate starvation tactics as millions are in dire need of humanitarian assistance.

Burdened with such fees, some aid organizations may not be able to continue operations.

British Foreign Secretary Boris Johnson said, “The Security Council is deeply alarmed that famine was declared in parts of South Sudan, that many more South Sudanese face severe food insecurity and is deeply concerned about the actions of all parties of the conflict that are perpetuating the humanitarian crisis.”

“In this regard, the Security Council condemns any undermining of the ceasefire and restrictions and attacks on humanitarian personnel and their facilities as well as on the United Nations Mission in the Republic of South Sudan to the delivery of humanitarian assistance especially to the famine affected locations,” he added.

The East African country is facing a devastating famine and one-third of the population depends on foreign aid for basic nourishment.

“The famine is not a result of drought. It is the result of leaders more interested in political power and personal gain than in stopping violence and allowing humanitarian access. The government’s continued unconscionable impediments to humanitarians seeking access to assist famine stricken populations may amount to deliberate starvation tactics,” Said US Ambassador Michele Sison.

However, South Sudan Deputy Ambassador Joseph Mourn Majak Ngor Malok rejected accusations that the government was to blame for the famine

“The government takes issue with accusations that it is responsible for it. It is also important to note that other parts of the country are affected by drought as a result of climate change. Transitional Government of National Unity therefore takes this opportunity to state that it will spare no effort to help address the situation and calls upon the international community to assist in addressing this urgent matter,” said Malok.

In a statement, the Security Council said it was “deeply concerned about the actions of all parties to the conflict that are perpetuating the humanitarian crisis.”