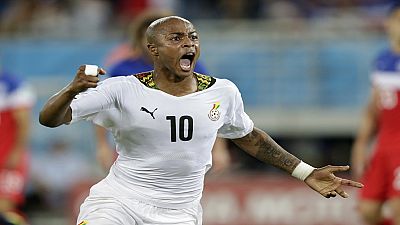 Ghana qualified for the Africa Cup of Nations semi-finals – the sixth time in a row – after beating DR Congo 2-1 with two goals from the Ayew brothers in Sunday’s quarterfinal match played at Oyem in Gabon.

West Ham’s Andre Ayew then sealed qualification for the Black Stars after slotting in a penalty late in the game to send the Congolese packing.

DRC, who had impressed during the group stage had a better first half but failed to take their chances which cost them dearly.

Congo captain who is also Hull City striker Dieumerci Mbokani came closest to open the scoring when he hit the post in the sixth minute after a mix-up by Ghana’s defenders.

The second half however saw Ghana playing with more intent as the game swung from the Congolese side.

The Black Stars will now play the Indomitable Lions of Cameroon in the semifinals.