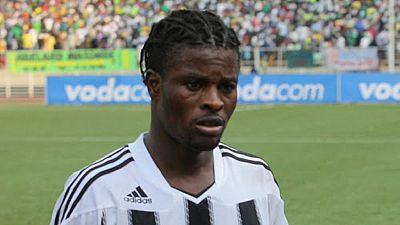 FIFA has lifted a sanction that it had imposed on Congolese striker Tresor Mputu, which had barred him from professional football for two years.

The Congolese Football Federation (FECOFA) received a letter from the FIFA authorizing the federation to allow Mputu to play for the club of his choice.

Mputu has chosen to return to his former club TP MAzembe and has regretted violation contractual terms with Angolan club Kabuscorp two years ago.

Mputu had in January 2014 signed a one-year contract with the Angolan club in a 1.5million USD deal, but by 2015, the player had left Kabuscorp as a result of a contractual conflict before rejoiningTP Mazembe.

“It was Mr. Dony, the secretary general of the club, who informed me that he was at the federation where he was informed that FECOFA had been authorized to clear me to play in the National Football League and CAF events. I asked him what do you mean? He replied “your case with FIFA is over. I was so glad I did not know how to express my joy,“he said.

The Angolan club had filed a complaint against Mputu with FIFA for breach of contract, to which effect FIFA suspended him for 2 years with a 2 million USD fine.

FIFA now considers Mputu no longer bound to this contract because the Angolan side has not paid the full amount in compensation on Mputu’s transfer.

Acknowledging his sins, the player has expressed his gratitude to Mazembe who continued to pay his allowances and bonuses for almost two years without his playing .

The Angolan club will be required to pay a sum of $1.5 million and penalties to TP Mazembe, according the club’s website.