African culture and entertainment highlights of 2016 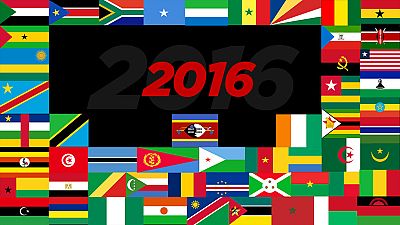 Africa’s culture was highlighted in the news of 2016 from several parts of the continent. The culture was backed by entertainment which includes music, film, art, and showbiz.

Africanews covered the culture and entertainment landscape starting the year with the unveiling in Nigeria of the tallest statue of Jesus Christ in Africa. This was followed by a look at witchcraft courts in traditional Congo.

The people of Mali received justice after the International Criminal Court handed a 9-year jail term to the rebel who destroyed the Timbuktu monuments.

In Nigeria, a senator called for support to table bill against tribal marks. This call was widely supported on social media but yet to be pushed in parliament. We also met with Algeria’s tattooed women who are proud of their culture.

Benin born actor, Djimon Hounsou embarked on a quest to change the negative perception about voodoo in Benin through a documentary. This was shot during the celebration of the 23rd Voodoo Festival.

History was made when an inmate band in Malawi had their album nominated for the Grammy Music Awards in the Best World Music Category. Senegalese musician Baaba Maal released a new album “The Traveller” after seven years of absence.

Niger’s fashion designer Sidahmed Alphadi Seidnaly was designated as UNESCO’s Artist for Peace. He was recognized for his commitment to culture and development at the service of peace and human dignity.

An Egyptian band of visually impaired musicians made the news for their concerts in promoting the importance of art in the special needs community. Mali also held its first acoustic festival.

It was pomp in Nigeria when a 15-year-old boy occupied the throne of a kingdom in the Delta State while mourning the murder of his father, the King. In the same country, comic business gets a boost with the founding of Comic Republic.

Morocco lived up to expectation with the 6th edition of the Marrakech Biennale arts festival which was free of charge in a bid to promote arts and improve accessibility. Festivals were heightened when South Sudan organised the first ever “Let Us Laugh” festival where stand up comedians helped laugh their worries away.

Easter was much more fun in Ghana where paragliding on the Odwenanoma Mountain in the Eastern region and street carnivals drew a large crowd from around the world. 2016 was also good for torusim in Egypt as the country hosted the Miss Eco Universe 2016 pageant to finding an emissary for environmental causes.

Nigeria celebrated the first ever Drum Festival that had at least 50 countries including 10 African nations and 19 states across Nigeria participating. Drummers in Egypt also filled the streets of Cairo to observe their own international drums and arts festival.

We met ‘Hijarbie,’ the hijab-wearing Barbie in Nigeria making a fashion statement. We later descended on Senegal for the Dak’art biennale festival where artists from across the world met to exchange ideas on latest developments in visual arts.

The death of African music legend Papa Wemba rocked the “Sapeur” community. Tributes were paid by sapeurs of Pointe-Noire to mourn their king.

In fashion, Togo displayed its designs to the world at the Lome Fashion Week, followed by Nigeria which hosted the Lagos Fashion Week. Ghana wasn’t left out as it hosted the Accra Fashion Week later in the year.

Various parts of the Ghanaian capital Accra, notably James Town and the Black Star Square, played host to an array of performers who took part in the Ghana Carnival 2016 showcasing sub-regional and Caribbean cultures. It was followed by the Chale Wote Arts Festival in Accra.

It wasn’t a good year for Congolese singer Koffi Olomide who was arrested in Nairobi for assaulting one of his dancers. He was deported from Kenya, his show canceled in Zambia and later arrested in his country for the same reason.

Miss World Kenya 2016 was dethroned for breach of code of conduct. She later sued to reclaim her crown. In another part of Kenya, a Catholic nun underwent a traditional marriage with the church to link religion with culture.

It was another year for the Reed Dance ceremony in Swaziland which was participated by at least 98,000 virgins.

Muslim school children in Kenya were given the green light to wear hijab to school after an appeal court’s ruling overturned a 2015 verdict by a high court that ruled otherwise.

In film, the Queen of Katwe, which is based on the life of a gifted and determined Ugandan chess prodigy premiered worldwide. The film also stars award winning actress Lupita Nyong’o and actor David Oyelowo. Nigeria also premiered the film 93 Days, which tells the story of the country’s brush with the Ebola outbreak and the its response to the deadly virus.

Kenya crowned its first Mr and Miss Albinism to show the beauty in persons living with albinism as well as to do away with stigma associated with the medical condition. Meanwhile, a Nigerian matchmaker links HIV positive people for relationships.

Nigerian music artist Wizkid swept away three awards at the 2016 MTV Africa Music Awards including the Artist of the Year.

Nigeria observed the Sokoto Durbar in the northwest which was graced by high profiled guests including the President Muhammadu Buhari.

At the end of the year 2016, Kenya’s Evelyn Njambi Thungu went close to being crowned Miss World as she made the Top 5 list along with fellow competitors from Puerto Rico, Indonesia, the Dominican Republic and Phillipines.