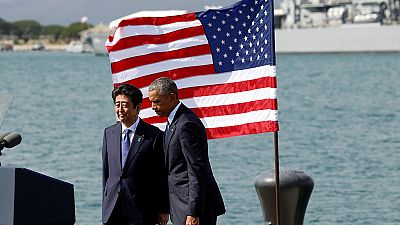 Abe was the first Japanese premier to visit the USS Arizona Memorial built for the American sailors and Marines killed in the 1941 sneak attack that thrust the US into World War Two. He offered his “everlasting condolences” to the victims.

The most bitter of adversaries can become the strongest of allies

“Our countries, which have eradicated hatred and cultivated friendship and trust on the basis of common values, are now, and especially now, taking responsibility for appealing to the world about the importance of tolerance and the power of reconciliation,” Abe said.

The Pearl Harbor bombardment killed some 2,300 US servicemen. Abe has not apologised for the attack, but said “we must never repeat the horrors of war again.”

“We must never repeat the horrors of war again.” — Shinzo Abe, who offered repentance in his visit to Pearl Harbor https://t.co/l3zkXMB46H

“The presence of Prime Minister Abe here today reminds us of what is possible between nations and between peoples,” Obama said.

“Wars can end. The most bitter of adversaries can become the strongest of allies. The fruits of peace always outweigh the plunder of war.”

Obama and Abe shook hands with some of the last Pearl Harbor survivors.

Obama said the relationship between the US and Japan was now a cornerstone of peace in the world, and that the alliance had never been stronger.