Salt healing dating back to the Pharaohs gains popularity in Egypt 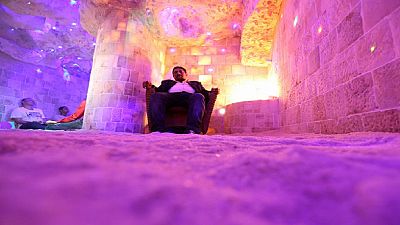 In an apartment in one of Cairo’s neighbourhoods, visitors get an opportunity to meditate and relieve their negative energy with salt crystals.

Known as the Khofo salt cave, it’s ceiling is made entirely out of crystallized salt, and the floors are coated in layers of salt.

It is the brain-child of Gomaa al- Agoury who graduated with a degree in Pharaonic Studies.

“We’re giving Egypt something new with this salt cave. The lighting inside the cave is done specifically so as to help with inner peace and decrease stress, insomnia and exhaustion. The music that is played is for healing, and the cave absorbs the negative energy because the salt absorbs negative energy,” he said.

The cave also offers salt-healing massages and salt baths, in addition to meditation sessions that have led to a regular flow of clientele.

“It is enough that when we enter a place like this, we leave everything behind, even our mobile phones are far away from us. We then find that all of our negative energy stored in our bodies is extracted from us and we feel inner peace, calm and serenity. It’s not that we’re just sitting in a salt cave, you can also have some time to sit and think about things that no one knows other than you and God,” said Amin Hamed, a customer.

For Gomaa, the cave has the potential of boosting medical tourism in Egypt.

“Currently Poland have started making salt rooms, and so have Finland and America, they have all started making salt rooms and even hotels, and have been marketing them for medical tourism. The former Soviet Union countries, like Russia, Poland, Ukraine, and Belarus, used to have salt resorts which were visited by famous people from around the world, even famous people from Egypt used to visit to treat Psoriasis, eczema, and other skin and respiratory conditions, as well as psychological conditions, all of which happened at these natural resorts.”

A half-hour meditation session in which a half a dozen people can enter the chamber costs about 50 Egyptian pounds, while those wishing to do it alone must pay an extra 50 pounds.

Which is perhaps not so much for an experience intended to create an optimal atmosphere for calmness and contemplation.