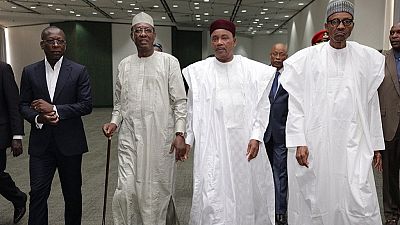 Except Cameroon’s Paul Biya, Nigeria hosted presidents of all her surrounding neighbours, Benin, Chad and Niger; who were in the administrative capital of Abuja on Monday for the launch of a biography on President Muhammadu Buhari.

‘‘Presidents of Benin, Chad, Niger joined me at today’s book launch. Our regional partnership is one I value very much,’‘ Buhari said in a tweet accompanied by a picture of him and his guests.

President Idris Deby Itno of Chad, Patrice Talon of Benin and Mahammadou Issoufou of Niger joined other political dignitaries at the launch of the book. Nigeria’s former presidents including Olusegun Obasanjo and Yakubu Gowon were all in attendance.

The book, ‘‘Muhammadu Buhari – The Challenges if Leadership in Nigeria,’‘ was written by Prof. John N. Paden.

Today Prof JN Paden, whom I've known for many years,presented his biography of me. I commend his intellectual effort pic.twitter.com/KDC7Q2rS5e

Buhari described the professor as one ‘‘whom I’ve known for many years’‘ and said he appreciated the intellectual effort of the academician in chronicling his life.

Buhari becomes the second Nigerian leader about whom prof Paden has written. His first was about Sir Ahmadu Bello – the Sardauna of Sokoto, the first and only Premier of Northern Nigeria in 1986.