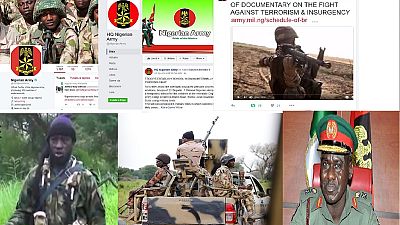 Ideological differences have often led to strife, the ensuing disagreements lead to friction and in cases where arms are involved, a conflict is inevitable. In the midst of all that, there are factors that accelerate or add ‘heat’ to conflict situations.

Contemporary wars have a key correlation with media, all ‘meaningful’ wars (if there are any) are extensively covered by the media to the extent that journalists have braved the odds to go to the front lines to report actualities even with the threat of death.

Why not? ‘Conflict creates news,’ says of a communications expert. And it makes a lot of sense. The importance of media in conflict situations pits the ‘terrorists’ on one hand and the armies on the other hand, an importance underlined in an era of psychological warfare. Call it propaganda.

The fact remains that terrorist groups have media contacts and presence on social media platforms where they push information about their activities. Al Ahmaq is known to be an outlet for Islamic State, Al Qaeda of old had outlets as does Boko Haram in Nigeria. Somalia’s Al-Shabab are known to verify their attacks through Radio Andalus.

The Boko Haram conflict started in Nigeria’s north east, specifically in Maiduguri, capital of Borno State. It has extended to other parts of Africa’s most populous country, further extension of the insurgency hit the Lake Chad region affecting Chad, Cameroon’s far north region and Niger.

At the height of the insurgency, the Nigerian army was being pushed back by the insurgents’ firepower, but that has changed since Muhammadu Buhari assumed office last year. A better equipped army has ramped up its counter insurgency and has reported that Boko Haram is restricted to the infamous Sambisa forest.

The Army, beyond the active combat against the insurgents has also taken the war online, the army through it’s website puts out information and pictures relating to the war on ground. Their social media portofolio is also very impressive.

On facebook for instance, the Army’s page is ‘liked’ by well over 75,000 people, whiles on Twitter it has a reach of over 126,500 followers. Through these two platforms and its website, the Army shares authentic information on the Boko Haram and other combat situations they are involved in.

Indeed, most Nigerian news portals pick most of their information on the war from the Army’s social media handles, subsequently, the army’s posts on twitter gets heavily retweeted and also widely shared on facebook.

Increasingly, especially with Facebook comments, the army could gauge the mood of Nigerians, most of who are excited about the many successes the army keeps chalking. The army’s spokesman Colonel Usman Kukusheku Sani has almost always enforced the resolve of the army to maintain security and clear remnants of Boko Haram fighters.

The army, certainly gets lots of feedback relating to the Boko Haram combat beyond the ‘praise singing’ and commiserations in case of a loss of a soldier or two. Via social media comments, the army hears the ordinary Nigerians speak. A case in point is when the army announced that they were setting up a rehabilitation center for ex-Boko Haram combatants.

Clearly that position of the army ruffled majority of facebook followers who raised different reasons why NO ex combatant should be trusted, whiles others advocated that they be killed outright. Of course a few others thought otherwise, but this was a pointer to the level of mistrust the public has for Boko Haram.

The Boko Haram fight has made Nigerian security a complex mix, where more soldiers are involved in ‘normal’ security operations especially in the embattled states of Borno, Adamawa and Yobe, undertaking tasks that ordinarily would be handled by Police.

Whiles at this, there is often a give and take between the army and media. A typical case in point was when the army was allegedly ambushed by Boko Haram. Premiumtimes and Sahara Reporters, two of Nigeria’s top internet portals, have often reported military casualties that the army has often disputed, but always having to present ‘true facts’ from their end.

The army also uses the online presence to react to issues raised about their operations, as was the case in the Amnesty International report indicting it for holding under aged boys in detention facilities and also in matters relating to their clash with Shiite sects in Kaduna State.

SAHARA REPORTERS AND CAMPAIGN OF CALUMNY AGAINST THE CHIEF OF ARMY STAFFhttps://t.co/QRwj6Gk0lt pic.twitter.com/RTSQoSG4Ri

In the recent case of the ‘second’ rescued abducted Boko Haram girl, the Army insists she was a Chibok school girl, despite pressure group Bring Back Our Girls averring the opposite.

The last time Boko Haram’s Abubakar Shekau released a video, the Army analysed and declared the contents of the video as a move by the terrorists to divert attention in order to hit soft targets as has become their stock-in-trade in the recent past.

The little issue of contention in all of this is the manner in which the army spices its information with bloody and gory pictures taken from the war front. Some of the pictures are so disturbing that whatever some media and medical experts have asked for moderation on the sensitive pictures irrespective of whatever motivation the army may have for publishing the pictures.

The Buratai-led army knows well that restoring confidence in the public, rolls far beyond their days on the active combat field and has duly garnered energy with information platforms that serve the public, if for nothing at all, their side of the story.