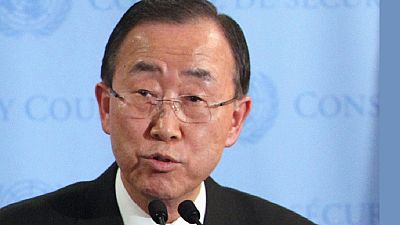 Ki-moon called for restraint in the light of the post-election violence that has rocked the country since the incumbent was declared winner of the August 27 polls. He tasked Bongo to exercise restraint and Ping to issue a clear message of non-violence to his followers.

This is the second time the UN chief was speaking to both men. He spoke to them ahead of the official declaration of the results after both camps claimed to have won the polls.

A statement from his office stated that the Secretary-General ‘‘deplored the loss of life that occurred during the demonstrations in the aftermath of the presidential election. He expressed concern about the continuing inflammatory messages being disseminated and called for an immediate end to all acts of violence in the country.’‘

He however welcomed the release of 27 opposition members that were detained in Mr. Ping’s campaign headquarters. He reiterated that his Special Representative for Central Africa, Mr. Abdoulaye Bathily, will continue to work with the parties in order to defuse tensions.

The Secretary-General stressed the importance of employing exclusively peaceful and legal means to seek redress in all dispute related to the outcome of the presidential election.

Incumbent president Ali Bongo Ondimba was declared winner of Gabon’s presidential election after polling 49.80% of the votes while his main opponent, Jean Ping polled 48.23 %. The opposition rejected the results claiming it had been rigged.

According to the official results announced last Wednesday by the Minister of Interior, Pachomius Moubelet-Boubeya, Ali Bongo as president-elect of Gabon beat the 73-year-old Ping with some 5,594 votes.