Mauritanian journalist sentenced to 3 years for throwing shoe at minister 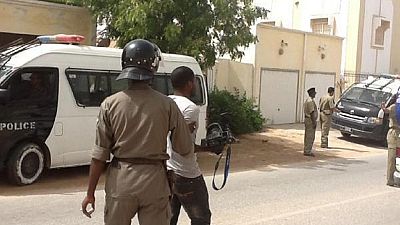 A Mauritanian journalist and youth activist has been sentenced to three years in prison on Thursday for throwing his shoe at a minister during a news briefing.

The 30-year-old journalist, Baye Cheikh Ould Mohamed, who works with an Arabic news website in the country missed his aim at the minister, Mohamed Lemine Ould Cheikh, on June 30, and then called him a liar before the police arrested him.

He was detained by the police and then charged on July 11 for violence against a public official.

“The journalist appeared before the Criminal Chamber of the Nouakchott court for outrage and violence against a public authority in the exercise of his functions,” a judicial source told AFP at the opening of his trial on Thursday.

By late afternoon, the court sentenced the journalist to three years in prison. His lawyers said they will appeal the sentence.

Brahim Ould Ebetty, one of the journalist’s lawyers told AFP that the judge didn’t consider the demands of the prosecutor who wanted a minimum sentence.

The court’s decision was not received well by a group of youth at the court belonging to the “February 25 Movement” which was created during the Arab Spring to oppose the regime of Mauritanian president Mohamed Ould Abdel Aziz.

The group, of which the journalist is a member, had rallied outside the prison where he was detained demanding for his release.

The group said in a statement that the journalist’s gesture was a standard protest while making reference to a similar incident in 2008 when a journalist threw a shoe at U.S. President George Bush in Iraq.