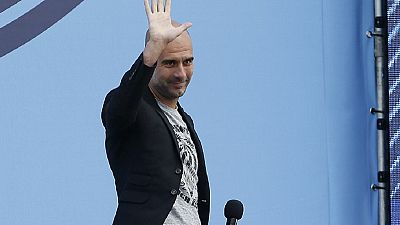 Pep Guardiola says he hopes to prove himself to fans after he was officially unveiled as Manchester city’s new manager.

He took a tour of the club before meeting a large crowd of City fans who had waited to see him speak at the Etihad stadium for the first time.

“Thank you for coming here to of course your house. It’s my new house, I’m so so glad to be here and thank you for Manchester City to give me this amazing opportunity to live in England, in Manchester, to be part of my job in the Premier League, and I am pretty sure we are going to enjoy (it),” he said to loud cheers.

Guardiola said he would focus on making his team play attractive and enjoyable soccer, with hopefully results following on from style.

“I proved myself in Barcelona and after I prove myself in Germany in Bayern and after I want to prove myself and my staff here in Manchester City…[The aim] is to try to win every game, every weekend and for Manchester City people to be proud of the way we play, and at the end we will see what is out level to achieve…
But at the end, after all the games, I want our supporters to be proud of what we did. If the people are not proud there is no point. We need our fans, without that it’s impossible.”

The club unveiled a new team logo, a new website and a new kit as part of a rebranding effort in what the club views as a long-term commitment to the development of the club.