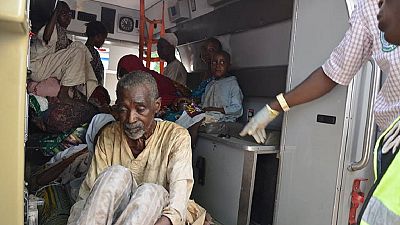 Following the recent spotlight of the United Nations and other humanitarian groups on the worsening conditions of people in displaced camps in Nigeria’s northeast, President Buhari on Friday sent a delegation to assess the conditions of the Bama Internally Displaced Persons (IDP) camp.

The delegation was led by the Presidential Special Adviser on Social Investments, Mrs. Maryam Uwais who reiterated the government’s commitment to bring relief to the thousands of rescued Boko Haram captives hosted in the IDP camp.

According to commander of the camp, the challenges they were facing included shortages of medical personnel, shelter, water and sanitation facilities. Buttressing the issues raised by the United Nations and ‘Doctors Without Borders.’

The Fed Govt team was received and taken around the camp by the Brigade Commander of the 21 Armoured Brigade, #Bama, pic.twitter.com/B2USmZUI5z

Mrs Uwais whiles admitting that the camp was indeed in a state of crisis, commended the military for their gallantry and dedication to securing and caring for the displaced persons.

According to Senior Special Assistant to the President on IDPs, Dr Mariam Masha, the governments at Federal and State levels were doing all they could to support the efforts of humanitarian workers.

Adding that they were also focusing on the longer-term work of ensuring that the reconstruction and resettlement is effectively hastened to enable the IDPs return to their homes and communities, and rebuild their lives and livelihoods.

Meanwhile the Nigeria National Emergency Agency (NEMA) has disclosed that most malnourished people in the Bama camp are being sent to the Borno State capital, Maiduguri, to receive better medical attention.

An ambulance with some of the identified malnourished persons from the Bama #IDP camp to be transported to Maiduguri pic.twitter.com/lwAQ6mEOR3

The six year old insurgency by Boko Haram has already resulted in the displacement of more than two million people across Nigeria, Cameroon, Niger and Chad.

In the third quarter of 2015, the Nigerian military launched Operation Zaman Lafiya Dole, and followed this up at the end of April with Operation Crackdown, intended as a final onslaught against Boko Haram in its Sambisa Forest base.