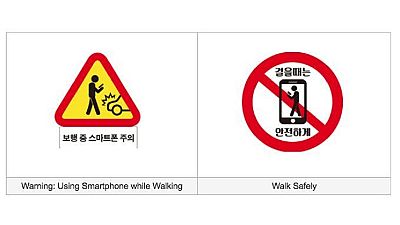 Seoul, South Korea’s capital is putting up over 300 new street signs to warn pedestrians about the dangers of walking while absorbed in their smartphones – there are some skeptics about whether the signs would be noticed at all.

South Korea, according to a Pew Research Center report, is the country in which most adults own smartphones, an estimated 88% of South Korean adults use smartphones.

The smartphone digital divide is clear, with a difference of 84 percentage points between the country with the most smartphone owners, South Korea.

With such a huge number of smartphone users, comes a difficulty which the National Police Agency and South Korea’s Metropolitan government are trying to solve. The over indulgence of people with their phones sometimes leading to fatal consequences.

The Seoul government unveiled two traffic signs as a part of a pilot program as part of efforts aimed at taking preventive measures to warn the city’s citizens to be more aware of their surroundings when using their smartphones.

Sign One: “Warning: Using Smartphone while Walking,” is for warning pedestrians about the dangers of getting hit by a car while using a smartphone while crossing the street.

Sign Two: “Walk Safely,” is designed to discourage users from getting lost in their phones while walking on the sidewalk. The new traffic signs will be installed in five districts (Hongdae, City Hall, Yonsei University, Gangnam Station and Jamsil Station)

The targeted areas according to the government have seen high reports of smartphone-related accidents from citizens in their 10s to 30s.

Not exactly a novelty

Seoul is not the first city to issue smartphone-specific solutions to accidents related to over indulgence with gadgets.

A few years ago, a Chinese theme park in Chongqing, implemented a walking lane designed just for people using their smartphones. A similar texting lane was installed in Washington D.C. as part of the “Mind Over Masses” science series campaign for National Geographic.

Technology experts meanwhile are wondering whether signs mean to be read by the head-down and busy smartphone users would make a desired impact. They have mooted that perhaps developers could also look to develop safe use apps to help save the situation.

But could the Seoul experience be replicated in cities around the world given the wide reach of smartphones and internet connectivity across the globe? If smartphone related accidents decrease in Seoul you never know when a sign would be planted in a street in your city warning you about your phone use.

What is a smartphone?

They have multi functional purposes combining features of a cell phone with those of other popular mobile devices, such as personal digital assistant (PDA), media player, GPS navigation unit and digital camera and radio.

Smartphones became widespread in the 21st century and most of those produced from 2012 onwards have high-speed mobile broadband 4GLTE, motion sensors, and mobile payment.