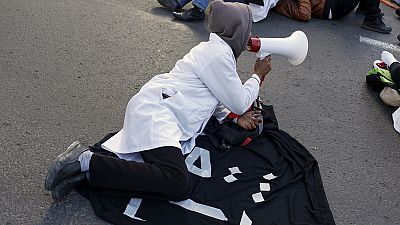 The Moroccan police have dispersed a gathering of twenty protesters in Casablanca protesting against “the absence of an investigation” after the revelation of names of some Moroccan personalities involved in the Panama Papers scandal.

Twenty activists had gathered at the center of Casablanca, the country’s economic capital.

They had called for the opening of an investigation, but were surrounded by the police.

The security men confiscated and destroyed their posters and banners.

Secretary to the King, Mounir El Majidi was mentioned in the “Panama Papers,” as being linked to two companies, DARS Limited, registered in the British Virgin Islands and real estate Orion, registered in Luxembourg.

On April 6, a Facebook page was launched by activists to demonstrate against the “silence of the government” on the matter.

The revelations of tax evasion on a large scale in the “Panama Papers,” involving senior political officials and athletes and billionaires, have caused a shock wave in the world leading to several countries opening investigations.

In Europe, the social discontent led to the resignation of the Prime Minister of Iceland Sigmundur David Gunnlaugsson.

In Great Britain, Prime Minister David Cameron is also under pressure from a section of the public who have expressed disappointment with the involvement of the prime minister in the scandal.

Other names of well-known African personalities on the Panama list include the former President of the Sudan,Ahmed Ali al-Mirghani, widow of Lansana Conté, former Guinean President, Mamadie Touré, member and Minister of Industry and Mines in Algeria, Abdeslam Bouchouareb, former Ambassador of Zambia to the United States, Attan Shansonga, , vice-president of the Supreme Court of Kenya, NDLR) Kalpana Rawal among a host others.