Marrakech Biennale - The convergence point of art in Africa 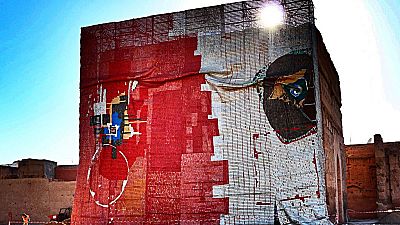 The event, first held in 2005, has this year drawn artists from the Arab world, the Mediterranean and sub-Saharan Africa.

Under the theme “Not New Now”, lead curator Reem Fadda is hoping to explore the concepts of time, matter, immateriality and advancement in the context of modern and contemporary art, according to the event website.

The ruins of the 16th century Palais Badi is host to some spectacular art works.

Algerian artist Rachid Koraïchi has dedicated his installation “Prayer for those Absent” – which consists of vases resting on rectangular bases in a pool – to his parents.

“I wanted to tell the story of our amazing relationship through these words on the pieces that remain. After my life they will be here for my children and grandchildren. The story is also etched in an accompanying work. I am an artist thanks to my parents. They never stood in my way, they never blocked me, on the contrary they encouraged me to do it,” the artist said.

Belgian artist Eric Van Hove has a rather interesting project on display.

It is a massive mock-up of a caterpillar bulldozer engine made from leather, bone, wood, plasterwork, recycled steel and copper.

“This Caterpillar engine has interested me for a while now because it’s a civilian engine, made for construction, but it’s been used in warfare, in war zones since the Vietnam war,” he said.

“In Iraq and all the wars until now it’s been used. And the piece in the Biennale, more specifically the D9T, is one type of Caterpillar engine that is used in the West Bank and in Gaza,” Van Hove said about his exhibit.

Moroccan artist and designer, Sara Ouahaddou has a rather interesting set up. Showcasing colourful jewelry pieces made mostly from steel, Ouahaddou said she was inspired by Berber jewellery which has been documented by prolific film maker, photographer and writer, Ahmed Bouanani.

She explained that Bouanani had documented drawings are designs of “an amazing jeweller. I re-worked his jewellery designs. I rediscovered his technique, his materials and modified them. To have a basis and a link, I also used his folktales as the basis for an imaginative interpretation.”

Eye-popping works of three pioneering artists who brought a new aesthetic to Morocco in the 1960s are also on display. Farid Belkahia, Mohammed Melehi and Mohamed Chabaa’s work make a vivid impression.

Moroccan artist Yto Barrada said: “Young people (are) working with traditional crafts, re-using them, re-learning them. I’m learning how to sew and weave since I left Morocco. And also the place of craft in the history of civil movements, civil rights movements, or in feminist movements or in gay rights has always been very important – you know, all these considered low-arts – the crafts.”

There is a variety of works on display. Some which provoke questions – and others that leave you spellbound.

An art collective has paid tribute to French-Moroccan photographer and journalist, Leila Alaoui who was killed in a terrorist attack in Ouagadougou earlier this year. They used recycled waste to create a huge lit tent bearing a photo of Alaoui and adorned by plastics.

The Biennale seeks to build bridges between cultures through art and Marrakech is the perfect place to do so.