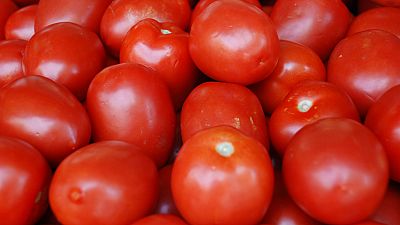 Tomato processing factories in Nigeria are working to secure the local market and keep out cheap imports.

Securing the local market has been difficult for Africa’s second largest tomato producer due to inadequate facilities.

Erisco Foods Limited established in 2008 deals in various commodities and started tomato processing in 2011. But the firm faces a variety of problems ranging from cheap imports and poor transport to unreliable power supply.

“As a matter of fact, we have a market because of our eating culture, because of our traditional eating system. The market for tomato paste in Nigeria is very huge, about 800,000 metric tonnes per year. But the problem now is that the market is being created in China,” Eric Umeofia, President of Erisco Foods Limited said.

Nigerians use tomato paste to prepare jollof rice and tomato stew. They prefer making their paste thick and concentrated so as to bring out the flavour in their meals.

Close to 1.5 million tons of tomatoes are produced annually of which 45 percent perish.

“We have been taking lots of insults in this country. I use my money to develop the factory. I don’t take NEPA (Nigerian Electric Power Authority), I’m on my own. I don’t have government water, what are you coming to… I pay tax to the government yet you don’t appreciate me,” he added.

Tomato consumers in the country spend about 360 million US dollars on tomato paste imported from countries such as Italy and China.

The “Mile 12” market in Lagos, considered by many as the biggest one stop tomato shop in West Africa, has a daily turnover of about 1,500 metric tonnes of tomatoes.

Analysts believe the sector has potential to contribute to Nigeria’s economy.

“We spend in the range of 400 to 500 million dollars annually just purely importing tomato paste and puree. It is a sad affair because we’ve got local capacity to actually produce it,” Bolaji Okusaga, an economic analyst said.

Feeding a population of 170 million is not an easy task and this has pushed the economy to sometimes rely on imported food.

The government in 2015 banned the importation of some 700 goods to prevent a currency collapse and encourage local manufacturing.

The move has been criticised by analysts who say many items listed are not available in Nigeria in sufficient volumes.