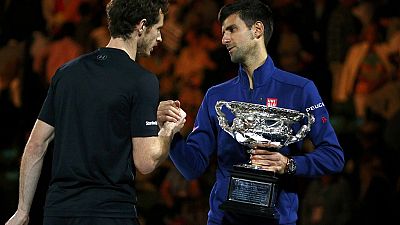 Andy Murray’s hopes of winning the Australian Open in his fifth final was dashed by Novak Djokovic who won by 6-1, 7-5, 7-6 in a clinical finish in Melbourne, Australia.

Murray lost his mojo from the 2-0 lead by Djokovic which he tried to fight out in sets two and three but failed.

The world number 1, Novak Djokovic justified his world position by winning his sixth title at the Rod Laver Arena. He early on beat Roger Federer in the semi-finals.

“I need to pay the respect to Andy and his team for another tournament…you are a great champion and a great friend. I’m sure in the future you are going to have more opportunities to fight for this trophy,” Djokovic said in his victory speech.