Brazilian Ministry of Sports and the Rio de Janeiro government have played down any effect of a threatened Summer Olympics.

The reassurance is coming in the wake of the outbreak of the Zika virus in parts of southern America.

Athletes and tourists considering whether to travel or not have nothing to fear, officials say.

The special arrangements they say are to ensure sports venues are clean and free of contamination, starting from a month ahead of the games.

George Hilton, Brazilian Minister of Sports said: “We are currently uniting with all ministries and committees of the federal government and the public to complete this task. The Olympic health monitoring departments and medical experts are busy developing a new vaccine. We are doing a lot to prevent the virus.”

Meanwhile, the president of the International Olympic Committee,Thomas Bach, says they are working closely with the World Health Organisation to protect athletes and spectators against the Zika virus as Rio prepares to host the world’s biggest sporting event on South American soil for the first time.

“We are in close contact with the World Health Organization, as well as with the organizing committee and the Brazilian authorities. We also have to see that the Olympic Games will take place during the Brazilian Winter so this time we will also have the different climatic conditions from now when we are in the middle of the Brazilian Summer.”

Data from the Brazilian Ministry of Health showed that as of Wednesday, some 4,180 infants microcephaly cases, caused by the Zika virus, have been recorded. 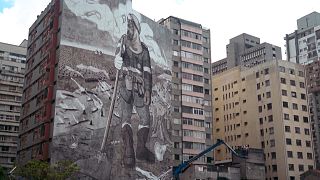 Brazil: a mural made with the ashes of the Amazon

Brazil: a mural made with the ashes of the Amazon