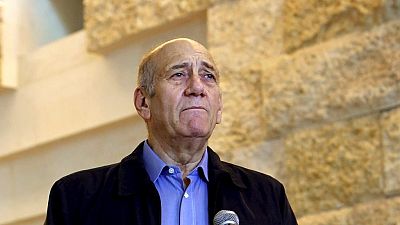 Israel’s Supreme Court reduced former Prime Minister Ehud Olmert’s prison sentence from six years to 18 months after overturning the main bribery charge against him. The ruling is a partial victory for Olmert though he will still be the first former Israeli leader to go to prison.

The charges related to his 1992-2003 term as Jerusalem’s mayor and a large real estate deal in the city.

The first criminal conviction of a former Israeli head of government nearly two years ago all but ended speculation that Olmert – a centrist credited internationally with working towards a peace settlement with the Palestinians – might return to political life.

He had denied any wrongdoing in the property deal that led to the construction of the hilltop Holyland apartment towers, a hulking stone complex widely seen as one of Jerusalem’s worst eyesores.

A Tel Aviv District Court found Olmert guilty in 2014 of two bribery charges, saying that he accepted 500,000 shekels from developers of the Holyland project and 60,000 shekels in a separate real estate deal.

Ruling on Olmert’s appeal on Tuesday, a five-member Supreme Court panel said it had not been proven beyond reasonable doubt that he had solicited the 500,000 shekels. It upheld his conviction on accepting the smaller amount.