Burkina Faso’s Prime Minister, Albert Ouédraogo, visited Tuesday survivors of the attack on military-led supply convoy, including civilians, drivers and traders. 37 people were wounded in the Monday attack. Among them, a dozen children are hospitalised at the Charles-de-Gaulle Pediatric Hospital in Ouagadougou.

"I would like to salute the team for the bravery, serenity and the responsiveness with which they took charge of the wounded. I therefore encourage them to continue along this path."

If the PM met with some civilians, at least 35 died after an improvised explosive device struck a convoy between Djibo and Bourzanga in the country’s jihadist-hit north. The emergency services quickly reacted to provide care to the wounded.

"We had to reorganised the teams, move some equipment to make space, and put additional beds and mattresses, Cyrille Priscille Kabore, the hospital director explained.That's how we were able to take 13 children who came to the air base, they were transported here by army 'ambjulances."

Dr. Ouedaogo, a surgeon at the hospital explained how his team adapted: "We had other patients we were getting ready to operate on, so we had to manage several situations at the same time. All these children were able to be taken care of, unfortunately we lost a child in intensive care, another one is still in a critical state however, his situation is stable."

Paying tribute to "the innocent victims", president Paul-Henri Sandaogo Damiba vowed to defeat the insurgents. "This umpteenth cowardly and barbaric attack is proof that we must continue the fight against all those who reject the extended hand," Damiba said.

Burkina's ruling junta, which seized power in January,declared the fight against the insurgency a top priority.

On Sunday evening, the day before the attack, Damiba welcomed a "relative calm" in several localities.

The government said it had intensified the army's "offensive actions" and also initiated a process of dialogue with certain armed groups, through religious and local leaders. 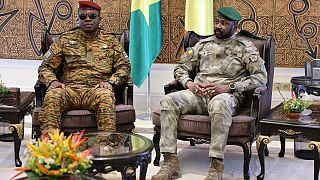 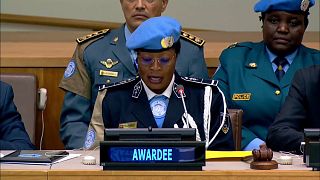 Burkinabe peacekeeper awarded the UN woman police of the year

Burkinabe peacekeeper awarded the UN woman police of the year