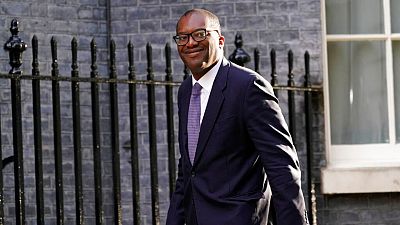 Kwasi Kwarteng, 47, is taking over as head of the British Treasury with the onerous task of trying to pull the UK out of a serious cost of living crisis without plunging the public finances into the abyss.

"There's a lot of pressure on Kwasi Kwarteng," as the political longevity of new Prime Minister Liz Truss will be intimately tied to her performance, says Tony Travers, a professor at the London School of Economics (LSE), interviewed by AFP.

The enthusiastic Brexit supporter and early backer of Ms. Truss - whom he is a long-time friend and neighbor in Greenwich, southeast London - is the country's first black Chancellor of the Exchequer.

He takes over from Nadhim Zahawi, an Iraqi-born Kurd, who himself succeeded Rishi Sunak, of Indian origin, and Sajid Javid, with Pakistani roots, embodying a more inclusive face of the Conservative party.

The son of Ghanaian immigrants who came to the U.K. in the 1960s, the former minister for enterprise, industry, and energy is also a true liberal, an advocate of low taxes and a free market economy.

Given his background in the Conservative Party, Mr. Kwarteng "looks in many ways like a sort of militant Thatcherite," says Tony Travers, referring to the former ultraliberal Prime Minister Margaret Thatcher.

The new finance minister co-authored the book "Britannia Unchained" in 2012 with other conservatives, including Liz Truss, which advocated a smaller state and called British workers "the worst slackers in the world" - the Prime Minister made waves during her campaign by again referring to a supposed lack of work ethic in Britain.

Mr. Kwarteng will first have to implement the tax cuts promised by Liz Truss. They will "put money back into people's pockets" and businesses to revive an economy on the brink of recession, he said in an op-ed in the Financial Times on Monday.

However, these measures "will mainly benefit the wealthy and large companies" without "helping low-income households or SMEs", warns Jonathan Portes, professor of economics at King's College.

Under pressure, Liz Truss has already promised immediate aid for the poorest, without giving details, but according to the press, this could include a freeze on energy rates, which have doubled in a year and are expected to rise further.

Kwasi Kwarteng "may have started (his political career) as a proponent of a smaller state and a more deregulated economy, but he lives in a world where the general public expects almost exactly the opposite," according to Tony Travers.

This will further increase the public debt, which had already skyrocketed with Covid-related spending and represents more than 95% of GDP.

Mr. Kwarteng has tried to reassure worried markets: he will pursue a "fiscally responsible" policy and assures them that once the current energy shock is over, the government will strive to reduce the debt - which, in relation to GDP, "is lower than for the other G7 countries, except for Germany," he points out in his speech.

As energy minister, he drew criticism from the opposition and NGOs when he unveiled a new British strategy in April that emphasized nuclear power and renewables, but also fossil fuels in the North Sea.

Mr. Kwarteng, described as brilliant, very confident, and affable, was born in Waltham Forest (north-east London) and has lived in the British capital most of his life. He is married to a lawyer, Harriet Edwards, with whom he had a daughter last year.

A polyglot - he reportedly dares to write poetry in Latin - and a history and music buff, the new Chancellor is little known to the British public: fewer than one in two had heard of him before his appointment, according to YouGov.

He is also a cricket fan. "If you can explain things to him by an analogy with (the sport), you'll always get his attention," Mark Fletcher MP, who has worked with him, told The Times.

The son of an economist and a lawyer, his background is typical of the British elite: secondary education at Eton on a scholarship, a doctorate in economic history at Cambridge University, after a spell at Harvard.

He worked as a financial analyst and newspaper columnist before being elected Member of Parliament for Spelthorne, southwest of London, in 2010.