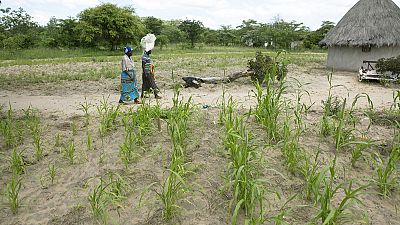 Since the war in Ukraine erupted 5 months ago, the grain supply chain was cut, further exposing the vulnerabilities of African countries. As governments of the second most populous continent try to respond to the urgency of the situation, Dr Adikini Scovia, a senior research officer and plant breeder advocates a holistic approach to achieving food independence. She has been championing the use of indigenous crops which could be a game-changer in Africa's quest for food security.

The World Food Program ship that left Ukraine for Africa is still en route. The shipment of 23,000 metric tons of wheat grain will moor in Ethiopia which grapples with an acute food crisis. When it arrives, it should become the first food delivery to Africa under a U.N. plan to unblock grains trapped in Ukrainian ports since the war erupted.

The global grain market has been disrupted by the conflict and Africa was particularly hit. A UNCA report showed that between 2018 and 2020, Africa imported 32% of its wheat from the Russian Federation and another 12% from Ukraine.

Dr Adikini is a researcher and project leader at the National Semi arid Resources Research Institute (NaSARRI) in Uganda. She is passionate about the revival of indigenous crops. She has amongst other things worked on varieties of finger millet and sorghum.

The NaSARRI project leader believes Africans hold a key to getting more resilient on their path to food security.

Why do you view millet and sorghum as high potential crops?

Millet and sorghum are crops that have roots in our countries, our regions and our continent. These are crops our parents, our grand-parents, grew and ate, these are the original crops of Africa. Talking particularly about millet, finger millet originated from Uganda. Similarly, sorghum has its origins in east Africa, parts of it in the Ethiopian highlands and others in Sudan. And that means that we have rich diversity for these crops that if well harnessed, we can amply address the issue of food insecurity.

How come millet and sorghum were progressively abandoned or neglected by locals who turned to staples crops like wheat?

Crops like wheat for example were introduced with technology and provided with tools to cultivate in abundance. That was an advantage for small-scale African farmers. They progressively abandoned their original crops, to adopt new ones. But when you look at that in terms of nutritional quality and health, Africa's original crops are excellent in many ways. Finger millet is called a nutri-cereal, it is nutritionally rich and medicinal. Similarly, sorghum is nutritionally rich and is a kind of crop which is recommended especially for people with diabetes.

People like white crops like rice, maize, but they don’t want finger millet because of its brown colour. They forget the fact that the brown colour in those crops has a very unique property [Editor's note: Flavonoids are common and widespread in the plant realm. They function as plant pigments. Acting as antioxidants is one of its numerous properties]. They are excellent in terms of nutrition! Yet we are talking of our children dying of malnutrition, why? If at all Africa can invest and look back at its original crops, we can amply address the issue of malnutrition by improving the technologies that are used to produce those crops.

Should decision makers pay attention to the lack of investment in those specific areas?

Decision makers should look at crop improvement, at ways to invest, support research on those crops, in order to make sure that they have the ability to yield higher because they have that potential. We need technology that can enable the ordinary farmer to grow their crops without drudgery. Many of our farmers complain about the difficulty they have to make their crop yield, but the kind of technology they are using make it hard to yield.

Look at finger millet and wheat: What is the difference between sorghum and wheat? They are almost both actually grass fields. When you grow them, they are almost the same, but wheat has a lot of investment and technology. If the same technology can be transformed for finger millet, sorghum, the ordinary farmer will actually appreciate it. To address this issue, we need to look at it through a broader perspective.

I look at things with a holistic approach. The research first, where we need to look into the aspect of crop improvement, crop-breeding, and the kind of technology that can move towards the input we need to support the population. Now the consumption of millet and sorghum is also low because of a lack of diversification in the use of this crop and yet sorghum and millet can equally be used to replace wheat.

The international crop research, is one of the CGIAR centre [Editor's note: Consultative Group on International Agricultural Research is a global research partnership for a future where hunger doesn't exist]. It developed recipes for which you can blend sorghum and wheat to obtain what you want. This has already been tested.

Would you like to share an innovation your organisation completed and which has been life changing for locals in Uganda?

The innovations that we have generated and benefit farmers include the release of finger millet and sorghum varieties that are tolerant to drought, pest and diseases with dense nutrients which farmers have adopted to address food and nutritional security.