Supporters of Deputy President William Ruto celebrated in the streets on Monday after Kenya’s electoral commission chairman declared him the winner of the close presidential election over long time opposition figure, Raila Odinga.

The win is a triumph for William Ruto who broke with tradition by appealing to struggling Kenyans on economic terms as opposed to ethnic lines.

"The reason as to why I believe in William Ruto is because he believes in the hustler nation. Hustler nation means everybody in his own hustle, in his own small business. He believes even in the wheelbarrow economy", said Ruto supporter, Francis Irungu.

"He is a guy who understands our country at large. He knows what we want.
He knows that those people who are down need to promote themselves to come up and that is why he promoted the bottom-up economy and that is why we are so happy today because we voted for him", explained another Ruto supporter, Nicholas Kemei.

The electoral race was close with Ruto obtaining just over 50% of the vote against almost 49% for Odinga.

In his acceptance speech, president-elect of Kenya, William Ruto, promised to rule for all.

"I want to commit to the people of Kenya that I will build on the foundation that President Kenyatta and I put together, and take this country to the next level. I want to promise all the people of Kenya, whichever way they voted, that this will be their government", promised the new president-elect.

Kenyans will now have to wait to see whether five-time contender Raila Odinga will contest the results through the courts. 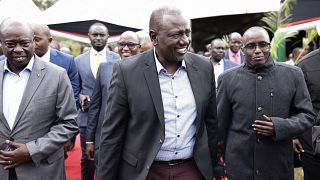