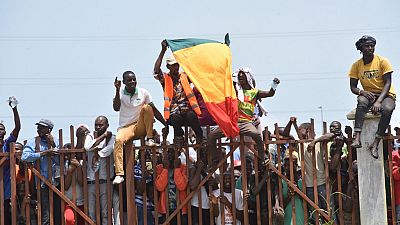 A major collective that has been opposing the ruling junta in Guinea for several months and which had spearheaded the protest against former President Conde (2010-2021), has been dissolved by a government order as it prepared a new demonstration.

"The de facto grouping known as the National Front for the Defence of the Constitution is dissolved" and "this order (...) takes effect from the date of its signature", says the document signed by Mory Condé, Minister of Territorial Administration and Decentralisation.

The National Front for the Defence of the Constitution (FNDC), a coalition of parties, trade unions and civil society organisations, was at the initiative of the demonstrations organised on 28 and 29 July, banned by the authorities and in which five people were killed, to denounce the "unilateral management of the transition" by the junta.

The announcement of the dissolution was leaked on social networks on Monday evening following a new call for demonstrations by the FNDC on 17 August throughout Guinea to denounce the absence of "credible dialogue" between the junta, political parties and civil society.

"Their modus operandi is structured by violent actions during banned demonstrations, attacks against individuals who do not share their ideology, and targeted actions against the forces of order," the government said in the order dated Saturday and authenticated Tuesday by AFP.

"This de facto grouping (...) provokes armed demonstrations on public roads and places, having the actions of a fighting group and private militias," it continued.

This collective "endangering national unity, public peace and living together, is not on the list of NGOs in Guinea, nor on the list of association collectives (...) and even less in the directory of NGOs approved in the Republic of Guinea", adds Mr. Condé.

"We do not comment on this order of the minister, we do not feel concerned," said Abdoulaye Oumou Sow, communications officer of the collective.

Cellou Dalein Diallo, the main Guinean opponent under former president Alpha Conde, condemned the decision, saying it was "a blow to freedom, justice, democracy and peace" on social networks.

"The Guinean Organisation for the Defence of Human and Citizen's Rights (OGDH) reacted by saying that it was "very concerned" by "the turn of events" and that "we believe that the confiscation of citizens' freedoms and the silencing of all dissenting voices will only further complicate the situation.

Two of the leaders of the FNDC, Oumar Sylla alias Foniké Mangué and Ibrahima Diallo, have been detained since the last demonstrations in the civil prison of Conakry after being charged with "participation in a prohibited gathering, looting, destruction of public and private property, assault and battery".

The collective had suspended its protest movements for a week, including the one planned throughout the country on 4 August, "at the express request" of the Guinea-Bissau head of state Umaro Sissoco Embalo, current president of the Economic Community of West African States (ECOWAS).

The truce had "the sole objective of giving a chance to the mediation of ECOWAS to find a favourable outcome to the crisis in Guinea", the FNDC said.

Colonel Mamady Doumbouya, who overthrew Alpha Conde, who has been in power since 2010, on 5 September, pledged to hand over power to elected civilians within three years. 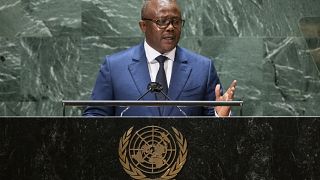